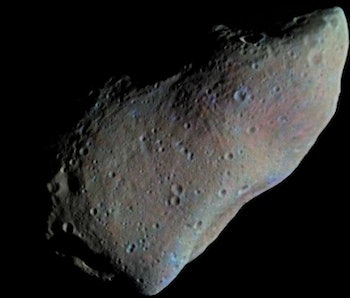 Here’s some news you can use to unite your conservative and liberal friends. Barack Obama may have sealed part of his legacy by limiting the government’s ability to regulate a burgeoning industry.

In a move that garnered sparse coverage outside of science publications, Obama in late November signed the Commercial Space Launch Competitiveness Act into law. The measure aims to grow private space exploration in part by limiting regulation on the industry until September 2023 as technology for commercial operations are developed. Private rocket scientists are celebrating one aspect of the law in particular: For the first time, America has clearly stated that companies will be able to legally claim ownership of any resources or minerals they’re able to collect in space.

“That was a real event for us,” Chris Lewicki, the president and CEO of asteroid mining company Planetary Resources, tells Inverse. “By taking this position, they’re providing a real foundation, a core framework we can build an industry and business around.”

It’s an industry that could, without hyperbole, change our way of life. Platinum-group elements used in electronics are scarce on Earth, but abundant in asteroids — as are nickel, gold, and iron. A single asteroid one cubic kilometer in size — roughly six city blocks in 3D — is estimated to carry as much as 7,500 tons of platinum, an amount that would go for roughly $150 billion on the ground, if world markets could bear it. Then there’s the prospect of mining for water. One of the reasons crewed rocket launches are so expensive is that you have to factor in the cost of materials, of which water is a vital component. By pulling those resources out of asteroids as they travel, rocket crews could bootstrap their way across the galaxy. Most of it is within close reach. There are thousands of asteroids closer to low Earth orbit than the surface of the Moon, waiting to be tapped.

Lewicki has the ideal background for these operations. Before he was at Planetary Resources, he was the flight director for the exploration rovers NASA sent to Mars in 2003, Spirit and Opportunity, and the surface mission manager for the Phoenix Mars lander.

“The future depends on a lot of things,” he says. “Getting tons of material is a ways off but identifying an asteroid to mine is something that will be done this decade. After that it’s a matter of extracting and purifying the material.

“You look at the Old West, and it wasn’t just miners that had success going out to pan for gold,” he says. “You had saloon operators popping up because there was an opportunity to serve those miners, and towns expanding. And you have to think of it that way that the expansion of an economic industry in space is going to support a lot more than just us. There are going to be people capitalizing and thriving off of what the industry will create.”

More like this
Innovation
8.13.2022 3:00 PM
Mars City: 3 Red Planet resources could forge a critical building material
By CAROLYN COLLINS PETERSEN and Universe Today
Science
8.5.2022 12:15 PM
10 years ago, the Curiosity rover arrived on Mars — and revolutionized the hunt for alien life
By Allie Hutchison
Science
12 hours ago
Artemis SLS on the launchpad and more: Understand the world through 7 images
By Robin Bea
Related Tags
Share: