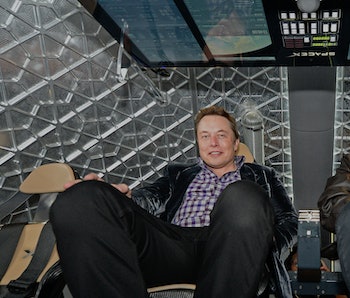 Elon Musk wears many hats — the mogul splits his time working on Tesla, SpaceX, Hyperloop, and now a boring company. However, during Tesla’s highly anticipated earnings call on Wednesday, Musk said that he would not give the electric car company the shaft if SpaceX gets even more seriously involved in a trip to Mars.

Musk was a little thrown that the first question of the call was about the red planet and not the Model 3, but an analyst wanted to know how Musk would spend his valuable time amidst rumors that the Trump administration wants to accelerate a manned mission to Mars. The questioner also asked if such a development would change Musk’s rationale for keeping the two companies separate.

“I expect to remain with tesla essentially forever unless somebody kicks me out, so that remains my intention,” Musk said. “I’ve been pursuing the Mars thing at SpaceX and sustainability at Tesla for a long time simultaneously so I think we’ve got into a pretty good rhythm,” he continued.

“I sorta don’t think I’m going to change my actions as a result of an initiative by this administration, although I think a Mars initiative would be amazing and energize the public both domestically and worldwide just as the Apollo mission to the moon did almost half a century ago,” he continued.

So, there’s still a chance that the Mars buggy might be a Tesla.