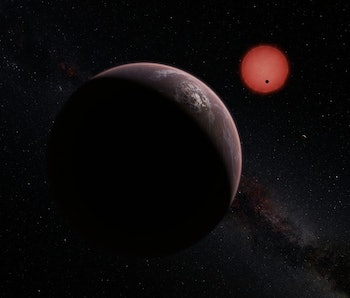 NASA has announced that astronmers have discovered seven Earth-sized planets 40 light-years away.

On Wednesday, NASA will hold a big press conference “to present new findings on planets that orbit stars other than our sun, known as exoplanets,” but the agency won’t say more than that. It’s probably not aliens. The impending news is still plenty exciting — and the ramifications could be huge. Here are a few educated guesses based on recent exoplanet findings.

The most prominent claim is related to the TRAPPIST-1 discovery from 2016. Rumors on social media have NASA announcing the addition of four additional Earth-sized planets, bringing the total to seven planets in the system rotating the star. But that’s not been confirmed ahead of Wednesday’s announcement.

It’s an ultra-cool dwarf star located about 40 light-years away from Earth named for the telescope in Chile that spotted it. Astronomers were thrilled when they discovered what looked like a trio of potentially habitable planets orbiting the star. Experts believe that smaller dwarf stars are probably a better bet when looking for habitable worlds, but since they’re so tiny compared to their distant, giant, hot stars, it’s harder to study them. Powerful telescopes can study a bunch of huge stars at once, while investigating a dwarf star requires a singular focus — and there’s no guarantee that researchers will find anything of interest.

That certainly wasn’t the case with TRAPPIST-1’s three planets. Further study confirmed that the star doesn’t have a companion star, meaning the visual interruptions in its light output that scientists noticed were almost certainly three Earth-sized worlds.

If NASA’s announcement has anything to do with TRAPPIST-1, it would be a big deal. It might have much more concrete information about what types of planets are orbiting the sun — information beyond the general size that might make them even stronger candidates for being habitable. In any case, given the way NASA has been hyping this announcement up, it’s probably good news.

If NASA’s news isn’t about TRAPPIST-1, then it might be about Proxima Centauri — the nearest star to our own sun. In August, researchers discovered an exoplanet, Proxima Centauri b, which sits squarely in the middle of the star’s theoretical habitable zone. Later studies found that stellar eruptions might threaten to drain away the planet’s oxygen, which would be a bad sign for life as we know it, but it’s still a tantalizing prospect — especially given how close it is to us, relatively speaking. NASA might be getting ready to tell everyone a lot more about how hospitable our neighbor is.

There’s also a chance that NASA’s announcement deals with Wolf 1061. The planet was discovered back in 2015, and at the time it was one of the closest, most promising exoplanets when it came to habitability. Wolf 1061 is a big boy — its mass is four times that of Earth — but NASA might’ve made a new bombshell discovery.

Or, perhaps NASA’s announcement will be more like its last big reveal. Back in May of last year, they confirmed the discovery of 1,284 new exoplanets, including nine which showed promise of being habitable to living organisms. We could be dealing with an entirely new star or previously undiscovered exoplanet.

The announcement will stream on NASA TV at 1 p.m. EST on Wednesday, and NASA scientists are hosting a Reddit AMA (Ask Me Anything) session about exoplanets shortly afterward, at 3 p.m. EST.