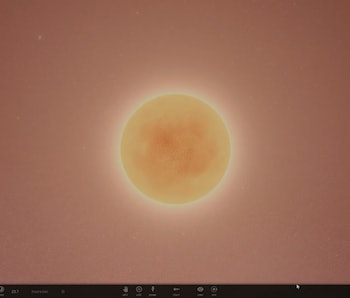 We have a hunger for habitable exoplanets that’s waiting to be satiated, but we may have just found a place that could live up to the hype: Astronomers from the University of New South Wales in Sydney just discovered a new, potentially habitable exoplanet just 14 light-years away from Earth, orbiting a red dwarf star, Wolf 1061.

Although the planet in question is four times the mass of Earth, it’s still most likely rocky and probably has a solid surface, and most importantly, it sits within what the reproachers call the “Goldilocks” zone — where it’s possible for liquid water to exist.

And where there’s water, there’s a potential for life.

“It is fascinating to look out at the vastness of space and think a star so very close to us — a near neighbor — could host a habitable planet,” says Duncan Wright, the lead author of the new study, in an announcement about the finding. ”While a few other planets have been found that orbit stars closer to us than Wolf 1061, those planets are not considered to be remotely habitable.”

As of December 14, astronomers around the world have found 1,996 exoplanets in the universe. There are 2,089 candidate planets waiting to be confirmed, and a near-infinite number of other worlds waiting to be discovered. Despite this, we have yet to stumble upon a planet that we know can sustain life. There are some that might host aliens, but the most Earthlike, Gilese 667 Cc, is still 23.6 light-years away.

The new planet, Wolf 1061c, is actually one of three new planets found orbiting the host star. One is just 40 percent larger than the Earth, but it sits too close to the star, just beyond the inner border of the habitable zone; the other is 5.2 times bigger but is orbiting much farther away from the habitable zone.

Wolf 1061c actually orbits its star every 18 days, so if we ever manage to send people over, we’ll definitely have to construct a new kind of calendar.

More research will be required before we can say for sure whether the new exoplanet really can host life — and more importantly, whether life already calls it home. But Wolf 1061c looks to be our best hope yet. Fingers crossed.