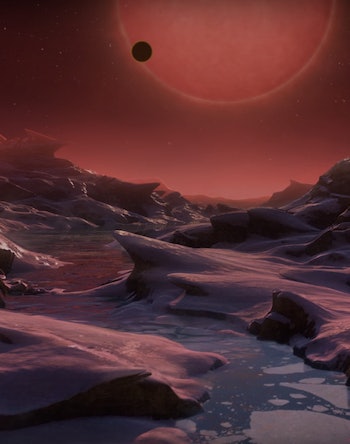 A team of scientists has just discovered our best chance to date of finding alien life beyond our solar system. In an article published today in the journal Nature, MIT astronomers identified not just one, but three Earth-sized, potentially habitable planets orbiting an ultra-cool dwarf star — and they’re only 40 light-years away.

Ultra-cool dwarf stars are actually the best stars to go after when looking for potentially habitable planets, yet they’re almost never studied. The usual subjects are bigger, hotter, brighter stars, because telescopes like Kepler are designed to look at 100,000 stars at a time and stars around 5,000 light-years away. Ultra-cool dwarf stars, though, must be studied one at a time because they’re smaller and dimmer, and so there’s no way to know before investing the time and resources into one whether or not it will be a waste of time. It’s a total shot in the dark — the payoff is much bigger, but the odds much longer. So long, in fact, that this is the first time astronomers have found anything around one of them.

The standard hot, bright stars Kepler cycles through might churn out a higher number of discovered planets — but once they’re found, there’s not that much other data that can be gathered, let alone anything about alien life. They’re so far away you can pretty much only determine whether they are there or not. To really characterize a planet and study its atmosphere, you have to start with a smaller star, and one much closer to Earth. And to find that, you have to do it the hard way, looking at one star at a time (because there’s nothing else around it, and you can see if something — i.e. a planet — passes in front of it).

To study these promising but labor-intensive long-shot stars, scientists used TRAPPIST (TRAnsiting Planets and PlanetesImals Small Telescope), a Chilean-based instrument built specifically to focus only on a handful of ultra-cool dwarfs at a time. This particular star, which in accordance with its newfound importance has been renamed from 2MASS J23062928-0502285 to the slightly less cumbersome TRAPPIST-1, is at least 500 million years old, but there’s no known limit to how long it might have been around. It could be as old as the universe.

“These are the first Earth-sized, potentially habitable options that are well-suited for us to study, because they’re so close,” said Dr. Julien de Wit, a postdoc in the Department of Earth, Atmospheric, and Planetary Sciences and a co-author of the Nature article. “This really gives us something to play with. Now we know they exist, and it’s not just one, it’s three, and we might find more in the near future. We’re going to expand to the North and see what happens. Ultracool dwarfs are really just the best place, if you want to find targets to really do in-depth studies of Earth-sized worlds. [We’ll be looking at all three planets] equally — the cool thing is that each has their own system and there’s a lot of different information. Each might be habitable, and each is very valuable to us.”

He and some of the other scientists met in Cambridge, England, earlier this week to discuss the building of a telescope like TRAPPIST-1 in North America and move the research along.

Once we’re able to observe the trio of planets more closely, he said, we’ll be able to see what kind of life they might potentially support — and the possibilities are wide open.

“We have literally no idea,” said De Wit. “We know they can be habitable. These are the very first planets where we’d actually be able to check that out. The next step is actually three steps: First, now to get to know if there’s an atmosphere or not and get the very first insight about it, if it’s thin, or if it’s extended, if we can find a water signature.”

“Next, beginning in 2018 looking at larger wavelength range and getting even more information about the atmosphere, assuming there is one. Learning about the conditions, the pressure, all this will help us assess habitability. Third, the next generation of the extremely large telescopes to search for biomarkers. This will be in 20 or 30 years.”