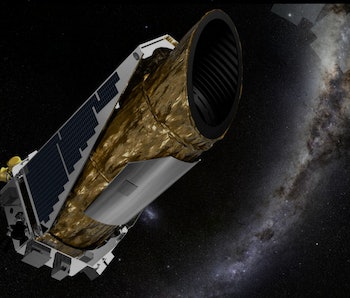 On Friday, NASA announced that its exoplanet-hunting spacecraft Kepler was in trouble. Mission operators discovered that Kepler was in Emergency Mode, a fuel intensive stage in which the spacecraft is at its lowest operational mode. In a turn of events and a testament to NASA’s engineers, the American space agency announced today that the $600 million probe has been recovered from near-disaster.

“The anomalous EM event is the first that the Kepler spacecraft has encountered during its seven years in space,” said Kepler and K2 mission manager Charlie Sobeck in a statement. “It was the quick response and determination of the engineers throughout the weekend that led to the recovery.”

While Kepler is still operating at its lowest fuel-burn mode, it reached a stable state Sunday morning, prompting NASA to cancel the “spacecraft emergency.” As of now, Kepler’s position allows its antenna to be pointed towards Earth, which allows ground control to download its data. The next step for NASA is to assess this data and make sure that the spacecraft is in a good enough shape to continue Campaign 9, a microlensing observing campaign.

Campaign 9 was previously scheduled to begin April 7th. The goal of the new mission was to maneuver the spacecraft’s telescope so that it will look into the direction of where it is going, instead of where it’s been (like it has been doing.) This reorientation would allow it survey the millions of stars in the center of the Milky Way galaxy, with the goal of finding distant stars’ planetary outposts and the exoplanets in-between via gravitational microlensing. NASA’s plan had been for Kepler to record a full frame image of these stars on April 14, which would be released to the public archive in June. If Kepler is in a good enough state, Campaign will conclude in July.

This isn’t the first time that the Kepler spacecraft has been in danger. In 2013, NASA announced that it was beyond repair and would be unable to be restored to its full working order. But while two of Kepler’s four reaction wheels (used to precisely point the spacecraft) failed, NASA engineers were still able to save it. While it didn’t have enough wheels to travel as efficiently and in the same range as before, Kepler was put on a new mission — K2.

First launched in 2009, Kepler detected more than 5,000 exoplanets — 1,000 of which have been confirmed — until it pivoted into its K2 mission. The goal of K2 has been to still search for exoplanets, albeit less efficiently, while also studying other astronomical objects like young stars and supernovae.

75 million miles from Earth, communication with the Kepler is slow — it takes 13 minutes for a signal to travel to the spacecraft and back to Earth. This distance has made it difficult to determine exactly why the spacecraft entered Emergency Mode. As of now, NASA has determined that maneuver planned for Campaign 9 and the wheels were not possible causes. The investigation to why this happened is still continuing.