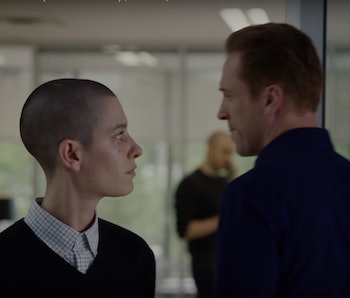 Sunday’s Season 2 premiere of Showtime’s Billions offered a teasing glimpse of new character Taylor Mason, a rising star at Axe Capital who takes no shit and insists on they/them pronouns.

Taylor is gender non-binary, an umbrella term for folks who identify as something that’s not strictly a man nor strictly a woman. It’s very likely the most high-profile non-binary role ever seen on TV. A bombastic white-collar crime drama isn’t exactly the place you’d expect to see better representation for genderqueers, which is part of what makes the debut so interesting and so important.

Actor Asia Kate Dillon, who also identifies as non-binary and uses they/them pronouns, snagged the gender-bending role. “When I saw the breakdown for the character, I felt like, ‘Oh my gosh, there I am,’” they said. “When I first read the script I wept, not only because it was me, but because a character has never said that on television before.”

It matters to have a non-binary actor play a non-binary character, not because that must always be the case but because that should be the rule rather than the exception to it. If cisgender actors are the ones to predominantly benefit from an increase in genderqueer roles, well it sort of deflates the point.

Language matters too. Folks who resist using a person’s preferred pronouns will often cite grammatical inaccuracy, or that it just sounds wrong to say “they” to refer to a known individual. But in reality, you only have to say they/them pronouns a few times before they start to slip off the tongue without effort. Broadcasting this language into millions of homes each week will genuinely make a difference in the lives of non-binary people, who spend an inordinate amount of time and energy educating people around them and correcting those who misgender them. Exposure matters.

Expect Taylor to develop into as morally questionable a character as any on Billions. Bobby Axelrod has already taken note of their sharp mind, and it won’t be long before Taylor has to make some tough choices to stay in his good graces. Wall Street isn’t known for its progressive values, and they’ll prove that you don’t have to buy into a gender binary to keep up with the big boys.