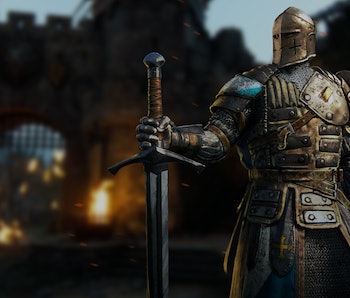 Elimination is the largest game mode available in For Honor, Ubisoft’s medieval combat simulator, and it’s focused entirely on taking down the enemy team. Unlike Dominion, For Honor’s flagship 4v4 multiplayer mode, Elimination is a little more straightforward because it doesn’t contain A.I.-controlled soldiers to deal with or a set of capture points to maintain. Instead, you’ll be matched with three other players against a team of four enemies, where killing the entire enemy team is the only condition for victory.

That said, Elimination is a much more challenging game mode to master compared its smaller counterparts thanks to a few added mechanics like boosts, feats, and aerial attacks — all of which are necessary to use if your team wants to come out on top. Here’s a few strategies to help you conquer your enemies while playing Elimination.

One of the strangest but most beneficial additions included within Elimination are the boosts placed around every single map. When picked up, they provide temporary bonuses for your character such as an increased health pool, additional damage when attacking, or extremely fast movement speed. In short, they’re invaluable when outnumbered or in a bad situation.

Even if it takes a few practice rounds, memorize their locations and take advantage of them when you need their specific bonuses most. For example, a speed boost (as indicated by the boots icon) should only be used when you are running around reviving other team members or collecting other boosts when overwhelmed. Remember also that they stack, so feel free to collect as many as you feel is necessary.

If you’ve been absorbed by 1v1 Duels or 2v2 Brawls, you probably aren’t too familiar with the feats available to each of For Honor’s character classes. Like your character’s unique set of special moves, feats can be equipped in four different slots and used to get a leg up on your opponent in any of For Honor’s 4v4 modes.

Almost every feat in the game has a timed animation or delay before being activated which must play out without being interrupted by incoming attacks. The key here is to learn how long each animation takes, then use it at opportune times. Keep in mind that feats aren’t available immediately however, and must be earned by defeating your opponents in combat. The more enemy players you eliminate? The more feats you’ll unlock for use as indicated by your lower-left HUD menu.

Use Aerial Attacks When Possible

Even though killing your opponents by using the environmental traps located around each map is a safer way of fighting back against overwhelming odds, the aerial attacks available in For Honor can be just as effective if you team up with a friend to lure players to their doom.

They may not be available on every map, but aerial attacks allow you to jump from higher ground and swing down hard on an enemy warrior, immediately killing them in the process. While not as effective as executing enemies with heavy attacks to knock them out for good, aerial attacks can be utilized when a group of enemies is chasing one of your team members to disrupt their charge. Just find a good location with a jumping point, and have your friend run enemies straight under you for a few easy kills.

You’re probably already familiar with the two types of basic attacks in For Honor: Light and heavy. Light attacks, while quick, don’t deal massive amount of damage. Heavy attacks on the other hand do when used properly during a combo attack, draining large chunks of your opponent’s health with a few swings.

Whenever you land a killing blow on an enemy with a heavy attack you’ll also be able to perform a brutal execution — often severing your opponent’s head in the process. Doing so permanently knocks them out of the current round, preventing members of the enemy team from reviving their downed ally. Unless you are struggling to take down an opponent in Elimination, always try to land a heavy attack and execute them so they can’t get back up if the tide starts to turn in their team’s favor.