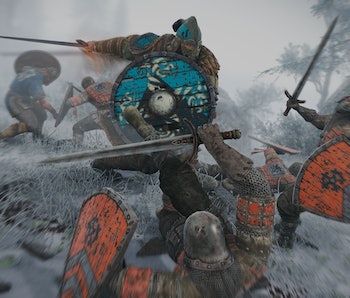 Whether you pledge allegiance to the service of the Knights, Vikings, or Samurai in Ubisoft’s For Honor, you’ll be participating in conflict on a massive scale, invading enemy territories to claim them as your own while protecting your homelands others looking to do the same. Mastering each of the available multiplayer modes is necessary to work your way through the ranks. While most of these modes — like Duel and Brawl — are relatively straightforward, the game’s flagship mode, Dominion, requires a little bit of practice to get right.

In Dominion, you and three other players are matched against another team of four. The goal is to break through the opposing team’s defenses and eliminate them before they can rally against your team. To accomplish this, you must capture three control points located around the map while simultaneously pushing back A.I.-controlled infantry until your team gathers up 1,000 points, which removes your opponent’s ability to spawn. Then, you’ve got to eliminate every enemy player before they can kill a member of your team or recapture an area on the map to claim victory.

Dominion has a lot going on at once, which makes it a bit more complicated than simply hacking and slashing your way through the enemy team. So, if you’re having a tough time with it, here’s a few tips to help you out.

Stick with Your Team

In Dominion, players will rarely respect the established rules of honor from the game’s alpha and beta testing phases. Instead of facing enemies in one-on-one encounters as you would in Duel, Brawl, and Elimination, you’ll often find yourself surrounded by two or three opponents at once while the rest of your team is fighting elsewhere. To avoid this, always make sure to stick with your teammates while playing Dominion and move as a pack while engaging in combat with opponents when the situation favors your advantage. Always be looking for opportunities to pick off enemies with low health who are isolated from their buddies, punishing them for being in the same unfortunate situation we’d recommend you avoid at all costs.

No matter how coordinated and skilled the members of you group are, you’ll likely find yourself in dire straits more often than once during each Dominion match. In situations where you are low on health or overwhelmed by a group of players, you’ll want to take advantage of For Honor’s Revenge mechanic.

Available once you’ve blocked and dodged enough attacks from your opponent, Revenge mode drastically increases your damage output and health pool for a brief period. This buff gives you an opportunity to even the odds against your opponent or survive dangerous encounters against some of For Honor’s heavy-hitting classes like the Shogoki or Lawbringer, so be sure to save it for moments of desperation. Don’t be afraid to use it aggressively either, though, especially if you have equipment which helps you gain Revenge at an increased rate.

Every For Honor location comes complete with a set of environmental hazards scattered around the map in various strategic locations. These traps, ledges, and pitfalls can be used to instantly eliminate your opponent with no questions asked provided you manage to grapple and throw them without being interrupted.

While playing Dominion, you’ll often find yourself in situations where multiple players are mercilessly beating you down as the last remaining survivor on your team. In cases like this, make sure to head to the nearest environmental hazard and use it to your advantage by throwing them off, one by one.

Don’t Be Afraid to Retreat

Since Dominion is a game mode all about balance, you should never be ashamed of retreating to a safe location to recover if the enemy team eliminates your fellow warriors. While it is possible to handle a 1v4 combat scenario with plenty of practice and a little bit of luck, you’ll end up dead on the ground with your teammates in most cases. That can mean the difference between a victory and loss if a control point is at stake. This especially holds true if your team is ever routed or forced into sudden death during the end of a Dominion match, in which case you should retreat to a capture location or isolate a single enemy to bring your teammates back to life for another go.

More like this
Gaming
6.22.2022 3:00 PM
TMNT: Shredder's Revenge is the retro beat ‘em up of your dreams
By Robin Bea
Gaming
22 hours ago
The 10 best PS Plus Essential, Extra, and Premium games
By Joseph Yaden
Gaming
6.21.2022 4:27 PM
Everything you need to know about Crisis Core: Final Fantasy VII Reunion
By Hayes Madsen
Related Tags
Share: