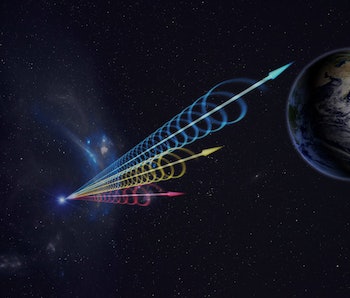 Every once in a rare while, Earth receives a brief radio emission from some mysterious place. They’re called fast radio bursts, and astronomers don’t know where they came from, what (or who) is creating them, or if they’re saying anything, since they just last a millisecond and noticing them takes quite a bit of luck. However, researchers at Harvard are hoping that maybe you can help ensure that scientists pick up the next one by using your cell phone.

The Harvard-Smithsonian Center for Astrophysics suggests that a free smartphone app could help experts out a great deal. Currently, scientists have only detected a little under two dozen fast radio bursts (FRBs), and they needed to use massive 1,000-foot radio telescopes to find them. It looks like all the FRBs we’ve noticed so far have hailed from distant galaxies, but it seems reasonable that there might be some signals within the Milky Way. That’s where your phone comes in.

“An FRB in the Milky Way, essentially in our own back yard, would wash over the entire planet at once,” lead author Dan Maoz of Tel Aviv University explained. “If thousands of cell phones picked up a radio blip at nearly the same time, that would be a good sign that we’ve found a real event.”

Past FRBs have operated on the radio frequencies that cell phones use, to a global network of cell phones running an app that monitored for such frequencies in the background would be well-primed to pick up such a message. Maoz and his colleagues say that a dedicated network of detectors — perhaps an inexpensive, $10 USB extension — would be even better.

“The search for nearby fast radio bursts offers an opportunity for citizen scientists to help astronomers find and study one of the newest species in the galactic zoo,” theorist Avi Loeb remarked.

The bad news, for anybody excited that their phone might soon pick up a call from a possible extraterrestrial, is that experts say they estimate that there will be an FRB in the Milky Way in 30 to 1,500 years. However, they say that FRBs tend to burst repeatedly, so if we do get lucky and pick one up in the near future instead of centuries from now, it might be a reoccurring event.

But, you know, maybe doublecheck your phone’s data plan before joining the hunt.

More like this
Science
7.26.2022 11:30 AM
Astronomers plan to track more potential “planet killer” asteroids near Earth
By Doris Elín Urrutia
Science
7.23.2022 11:00 AM
Astronomers have an ambitious plan to discover the first light in the universe
By Kiona Smith
Science
7.25.2022 10:00 AM
The best ways to find life using the Webb telescope, according to two astronomers
By Chris Impey, Daniel Apai and The Conversation
Related Tags
Share: