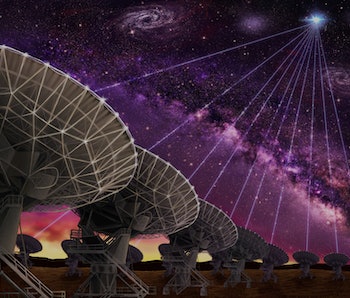 The origin and nature of Fast Radio Bursts (FRBs) are one of the biggest mysteries in space science. These high-intensity radio signals are zipping through the cosmos at ultra-fast speeds. Since they only last a few miliseconds, they’ve been extraordinarily difficult to characterize. At long last, astronomers have pinpointed the location in the sky of an FRB, providing a way to determine the distance and hometown galaxy of these strange signals.

Although an explanation of an extraterrestrial origin would be a more exciting prospect, it turns out in this case the FRB in question — of which we have now found 18 since 2007 — comes from a dwarf galaxy three billion light-years away from Earth.

This particular FRB is more unique than the rest. Discovered in November 2012 and dubbed FRB 121102, it’s recurred several times — stoking the notion that whatever was producing it was operating on a recurring cycle. That’s why many people were hopeful this was a sign that aliens were trying to communicate with us, although the scientific community suspected there was some celestial phenomena that was simply pushing these signals out again and again — like a supernova or strange pulsar.

The National Science Foundation’s Karl G. Jansky Very Large Array, capable of precisely marking an object’s location in the sky, detected nine separate bursts from FRB 121102 in just about 83 hours of observing time during a six-month span in 2016. With the VLA data having pinpointed a precise location in the sky, the scientists then turned to the Gemini North telescope in Hawaii to figure out what sort of object was in that location. As it turns out, a faint dwarf galaxy was host to the FRB emissions.

After that, other researchers working with the European VLBI Network, the William E. Gordon Telescope at the Arecibo Observatory in Puerto Rico, and the NSF’s Very Long Baseline array, worked together to pull out even more precise data.

As a result, we now know the FRBs and their source are less than 100 light-years apart from one-another. That’s still a huge distance of course, but in terms of the universe, it’s a stone’s throw away.

“We think that the bursts and the continuous source are likely to be either the same object or that they are somehow physically associated with each other,” said Benito Marcote from the Joint Institute for VLBI ERIC in Dwingeloo, Netherlands, in a press release.

So far, the researchers have narrowed the top culprits of FRB production to neutron stars, highly-magnetic magnetars surrounded by material ejected from a supernova or a pulsar, or a galaxy nucleus with radio emissions streaming off material hanging around a supermassive black hole.

Any of those explanations sound dope, but there’s a word of caution the researchers impart: these new results (published in Nature and also in companion papers in the Astrophysical Journal Letters) was only possible because FRB 121102 is repeating. Scientists have yet to detect another FRB that repeats like this — and for that reason, FRB 121102 may be physically different from the others. We may have simply found a phenomenon with a phenomenon — still cool, but an extreme outlier.

Nevertheless, the findings will persuade the astronomy community to pay more attention to dwarf galaxies as a whole, which seem to be more energetic than we initially predicted.

More like this
Science
8.12.2022 12:30 PM
Astronomers pinpoint the source of a mysterious cosmic particle
By Kiona Smith
Science
8.14.2022 7:00 PM
Do aliens exist? Jupiter’s moon Europa could hold the answer
By LAURENCE TOGNETTI and Universe Today
Science
8.13.2022 10:00 AM
How the Webb Telescope could unveil the newborn universe
By CAROLYN COLLINS PETERSEN and Universe Today
Related Tags
Share: