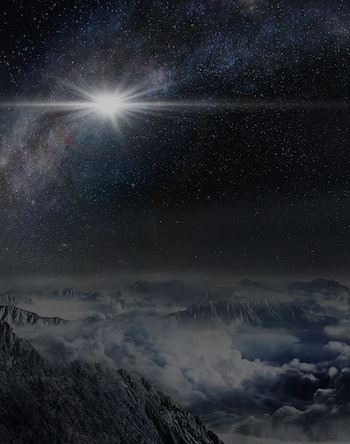 About 3.8 billion light years away, there’s a hot ball of gas shining 570 billion times more brightly than the sun, and glimmers 20 times more powerfully than all the stars in the Milky Way combined. It looks to be a supernova, but if that’s the case, it makes all other supernovae look like scuffed-up golf balls by comparison.

Also, it’s just 10 miles in diameter. It’s hands-down one of the strangest cosmic features humans have ever found. Hard to believe it took us this long to detect something so bright, but hey, it’s a pretty big universe out there.

In seriousness, it’s not easy to find something 3.8 billion light years away. It takes some pretty sophisticated instruments to peer that deep into the void. Luckily we have something designed just for that: the All-Sky Automated Survey for Supernovae, or ASAS-SN (yes, that’s pronounced “assassin”), a supernova-detecting instrument based at Ohio State University and operated by an international team of astronomers that, according to astronomer Krzysztof Stanek, is capable of observing virtually the entire sky.

While ASAS-SN has discovered more than 250 supernovae since 2014, it’s not really designed to look beyond 350 million light years from Earth. If something 11 times farther out wants to be seen, it has to outshine everything else.

That’s what the ASAS-SN team found last June. Though they had no idea what exactly they were looking at, Stanek says he and his colleagues “already had some inkling this was a big thing.” After a month of analysis, they realized this was a once-in-a-lifetime discovery.

A big question remains as to what exactly this thing, affectionately named ASASSN-15lh and the focus of a new study published in the journal Science on Thursday, is. It looks like a supernova, but how could it possibly express such a high force of energy?

One theory suggests that at the center of the potential supernova lies a magnetar — a very rare and powerful kind of star that emits an extremely strong magnetic field. That magnetic field powers the release of high-energy electromagnetic radiation, especially x-rays and gamma rays.

If ASASSN-15lh does indeed contain a magnetar, Stanek describes it as a magnetar “turned up to 11.”

In a news release, Ohio State astronomer Todd Thompson speculates that this particular magnetar could be what’s called a millisecond magnetar — an even rarer, denser type of star that spins at incredibly high speeds. Thompson thinks a ASASSN-15lh magnetar would probably have to spin at a rate of 1,000 times a second.

But as of now, no one can say for sure what’s powering ASASSN-15lh.

In any case, the ASAS-SN team will be using the Hubble Space Telescope later this year to finally determine what exactly is going on at the center of this supernova. “ASASSN-15lh offers a great puzzle as it challenges all previous theories for supernova explosion mechanism and power sources,” says Subo Dong, an astronomer based at Kavli Institute for Astronomy and Astrophysics, and the study’s lead author. “I wish more exciting discoveries like it will follow in the near future.”