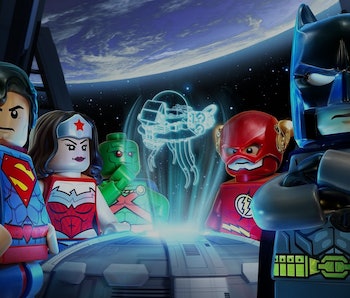 Lego and DC Entertainment’s The Lego Batman Movie is a laugh-a-minute romp that’s easily as heartwarming as it is mindlessly entertaining. Not only are Batman and Robin the ultimate onscreen dynamic duo, but they’re joined by an expected cast of classic characters, and a group that is much, much less expected.

This post contains serious spoilers for The Lego Batman Movie.

The movie’s really big plot twist comes when Joker gets himself sent to the Phantom Zone, an alternate dimension the place where the baddest of the bad are kept. Lego Batman’s creators reached deep into the science fiction and fantasy film genres to bring its audience a terrifying (and adorable) cast of supervillains — and we’re not just talking about DC villains here, folks.

Joker recruits an army of famous Big Bads to take down Batman, Robin, and the rest of Gotham City to prove, once and for all, that he is Batman’s arch-nemesis. Here’s a list of the nine most surprising cameos in Lego Batman.

He Who Must Not Be Named spends his time in Lego Batman using the Wingardium Leviosa levitation spell on Batman, flying around, and leading the insane cast of bad guys on a rampage against Gotham alongside the Joker.

8. The Eye of Sauron, voiced by Jemaine Clement

J.R.R. Tolkien’s legendary necromancer and the creator of the One Ring, Lord Sauron, appears in tower form, only to be burned to a crisp by one of Godzilla’s fireballs.

The fire-breathing version of Godzilla takes Sauron down and generally causes havoc throughout Gotham. He terrifies the Gothamites and knocks down buildings.

At Godzilla’s side through most of the movie is King Kong, climbing buildings and doing a lot of yelling.

Dubbed “British robots” you should “ask your nerd friends” about, the Daleks don’t do much other than make Doctor Who fans smile and screech “Exterminate!”

Yes, those Gremlins. They do a lot of damage to Bruce Wayne’s various Bat-vehicles.

3. The dinosaurs from Jurassic Park

They talk. And they chew a lot of things. Clever girls.

Jaws also chews a lot of things, but his big moment comes when Robin stops his attack with a can of “shark repellant,” a nod to an infamous scene from the wonderfully corny 1966 Batman movie.

These The Matrix characters had one of the briefest but best-received cameos in the film. To say more would ruin the moment.

The Lego Batman Movie is now in theaters.