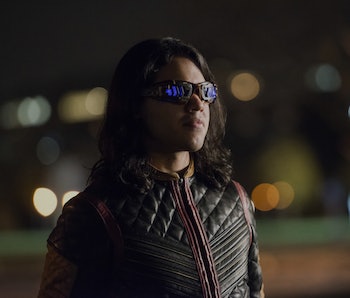 Did you think Flashpoint was erased when Barry fixed the timeline on The Flash? Think again.

In this week’s episode “Untouchable” a quantum mechanics theory proposed by Cisco (Carlos Valdez) and HR (Tom Cavanagh) theorizes that the Flashpoint timeline still exists in another universe where Barry didn’t fix the timeline and simply stayed there. With Team Flash in a pinch, Cisco gives the theory a shot and successfully vibes to Flashpoint in to identify Yorkin’s next victim.

But Flashpoint! It’s still on, friends! Here’s how it works out: In short, with any decision you make — say, you picked A instead of B — there exists an alternate universe where you picked B. “For every decision you make, a universe exists where you don’t,” Wally arrogantly puts it. “Yeah, I actually went to that class.” His dad, Joe (Jesse L. Martin), hilariously replies: “You better be going to all your classes.”

Not for nothing, but The Flash is only sort of right. While it isn’t exactly decisions that dictate alternate universes, it’s probabilities that do. The Flash borrows much of the Many-Worlds Interpretation (MWI), originally put forward by physicist Hugh Everett in 1957. Eating an apple instead of an orange for breakfast might not make a huge impact, but certainly, rewriting history will.

Team Flash needs to spot the next victim of Yorkin’s — he’s been targeting Central City cops from Flashpoint — so Barry focuses on Flashpoint, allowing Cisco to vibe his way there.

Seconds before Cisco vibed, the theory that Flashpoint could still exist was just that: a theory, and Cisco didn’t think he could do it. Just like Wally West (Keiynan Lonsdale), who in “Untouchable” didn’t think he could phase until he phased his blood into Yorkin, neutralizing his metahuman power. And that’s the real lesson, folks: You never know what you can do unless you try.

The Flash airs Tuesday nights on the CW.

More like this
Entertainment
Jan. 17, 2023
The Flash's final season will give the Arrowverse the sendoff it deserves
By Eric Francisco
Entertainment
Jan. 25, 2023
The MCU could bring back a hero from its most underrated TV show
By Dais Johnston
Entertainment
Jan. 13, 2023
Mike Colter would "entertain" the idea of coming back to Luke Cage
By Hoai-Tran Bui
LEARN SOMETHING NEW EVERY DAY.
Related Tags
Share: