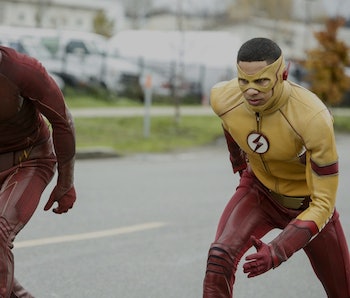 Wally West might be faster than Barry Allen, but young Kid Flash hasn’t mastered all of the OG Flash’s tricks just yet. Or at least, he hadn’t at the start of the episode. On Tuesday’s episode, Wally continued to improve his skills as part of Team Flash’s new plan for the eventual showdown with Savitar by learning how to phase through matter. It’s a major power-up — and it already saved Iris’s life.

After Barry beats his portage in a high-stakes race by running through a building instead of over it at the start of the episode, he decides that it’s time Wally learned how to phase. His initial training doesn’t go well, and it looks like Barry and Wally’s friendly speedster rivalry is starting to turn a little ugly.

That tension only worsens when Clive Yorkin — a meta-human that Julian accidently created — shows up to enact a grudge straight out of Flashpoint. After murdering a couple people for the slights their alternate universe selves committed against him, Yorkin tries to hunt down Joe. He’s thwarted but decides that going after his daughter, Iris, would be better revenge.

In what’s hopefully not a preview of things to come, Wally isn’t fast enough to save Iris from Yorkin’s touch. At S.T.A.R. labs, Caitlin needs to tap into her Killer Frost Powers to slow Yorkin’s disintegration powers, while Cisco vibes into the Flashpoint universe for clues about how to defeat Yorkin. (Oh yeah, Cisco can just vibe into the Flashpoint universe at pretty much any point now, which seems like something that might come into play again later.)

When Yorkin goes after another target, Wally and Barry rush to stop him. After he creates a barricade on some train tracks, Wally needs to phase an entire train through the rubble in order to save everyone onboard. It’s the most phasing that he’s ever done, but he’s not the only one who does some major phasing that night. Barry has realized that phasing some of Wally’s blood into Yorkin (gross) will neutralize his powers. With the life of his sister on the line, Wally leaps at Yorking … and goes straight through him.

Wally is quickly becoming a full-fledged Flash, which is very good given the challenges that Team Flash has in store, challenges like, oh, let’s say a massive two-week showdown with Gorilla Grodd.