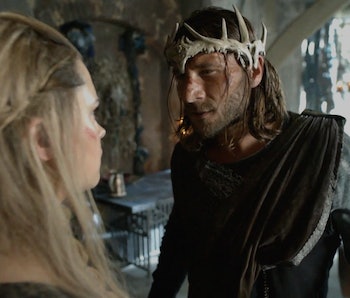 King Roan, played with wily snark by Zach McGowan on The CW’s The 100, is not the leader who has brought the most emotional punch to the show. He’s not the most unpredictable or the most progressive. That’s Grounder leaders Lexa, Anya, and Indra respectively. He’s not the most foolish or power-hungry, either — that would be Mount Weather’s President Wallace, Skaikru’s Charles Pike, and Season 3’s would-be Commander Ontari. But although Roan falls in the middle of the road in terms of vision and competency, his place as Season 4’s political powerhouse offers a shake-up for the story: A chance for Clarke Griffin and Bellamy Blake to be adults in a new way.

The 100 is about many things, with environmentalism and resilience in the face of war and death being some of the obvious ones; but two of its ongoing stories are most prevalent: the burdens that come with being a leader and the way Bellamy Blake (Bob Morley) and Clarke Griffin (Eliza Taylor) come of age in this brutal world. Through their dealings with the various leaders around them, the two original co-leaders of the Delinquents have explored their own potential, evolving from kids flying by the seat of their pants into capable adults.

Season 1 and 2’s Anya (Dichen Lachman) and Mount Weather President Wallace (Raymond J. Barry) were both the leaders of Clarke’s teens. Their relationships were full of mistrust and largely contentious until they were forced into uneasy alliances. Season 3’s Lexa (Alycia Debnam-Carey) was the leader of her early adulthood — emotionally speaking, as Clarke is still a teen.

Through Lexa, Clarke tried on various identities that didn’t quite fit — most notably, the Season 2 notion that love is weakness — until she found one that did in Season 3. Although Lexa died before the two could enjoy their new relationship for long, her legacy lives on in the form of Clarke’s comfort in her own skin as someone who can lead and love.

Season 4 already shows the impact of this emotional maturity because Clarke is able to be candid with Roan in a way that she hasn’t been with any other leader yet. It took her a long time to get to this point with Lexa, but she lays all her cards on the table in Season 4’s “Echoes.”

“You know I wouldn’t be offering it if what I was saying wasn’t true,” she says as she hands Roan the Flame in return for his protection. It pays off. Roan is receptive to her honesty (“I want what’s best for my people, same as you”) and they’re able to establish a dynamic that’s very adult. They might not love each other or be friends, but they don’t need to be. They have a foundation of trust and respect that makes for a productive working relationship.

Bellamy, on the other hand, has had a more tumultuous experience with leadership than Clarke has. This is largely because of his upbringing on the Ark, in which he lived in fear of authorities discovering his sister Octavia. On the ground, his experience with Mount Weather, Lexa, and Charles Pike have led him to see leaders as betrayers. Marcus Kane has been something of a mentor, but Bellamy has been too skittish to take full advantage of that relationship.

But at the end of Season 3, Bellamy was able to work with Roan to tackle the larger threat of A.L.I.E. and the City of Light. Like Bellamy, Roan is also something of an outsider, having lived alone in exile for a time (“Roan is my cowboy,” Zach McGowan told Inverse). Although the two did not interact in the premiere episode of Season 4, it already showed how Bellamy has matured. He’s ready to take Marcus Kane’s advice again (“You turn the page and you don’t look back”) and deal with Roan’s right-hand woman Echo in a diplomatic manner. He’s finally grown up.

As the political figurehead in Season 4, King Roan might not be the person Bellamy and Clarke want. To Clarke, he’s not her deceased love Lexa, and to Bellamy, he’s still a Grounder leader whose second-in-command helped kill his girlfriend. But he’s what they need. Through their alliance with a competent leader who treats them with respect, Bellamy and Clarke can both step forward in their own development, bringing the show along with them.

Of course, as this is The 100, their alliance with King Roan could very well crumble at any second. But that’s all part of the ride.

More like this
Entertainment
8.12.2022 4:04 PM
The Mandalorian Season 4 is coming sooner than expected
By Dais Johnston
Entertainment
8.9.2022 1:00 PM
Has your favorite HBO Max show been canceled? The fate of 9 sci-fi series revealed
By Robin Bea
Entertainment
8.5.2022 12:30 PM
For All Mankind Season 3’s space mogul is better than Elon Musk — here's why
By Ryan Britt
Related Tags
Share: