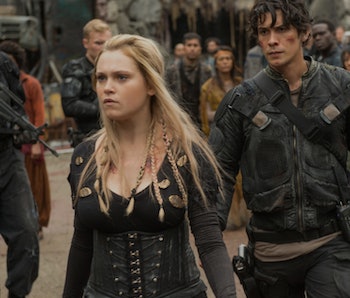 Season 4 of the post apocalyptic drama The 100 is right around the corner. With it will come the inevitable adrenaline-fueled plotting, sequences of Clarke and Bellamy exchanging worried looks, and Octavia kicking ass and taking names. But it will also pick up right where the complicated third season left off. You probably remember the big picture ideas, like the fact that another environmental apocalypse is imminent. But if the smaller details of Season 3 are fuzzy and you don’t have time for a re-watch, here’s a spoiler free primer on what you need to know before starting Season 4.

The City of Light

The City of Light was essentially a creepy version of the Cloud that everyone’s consciousness can be uploaded to. It enabled humans to “live on” after death and overcome physical and mental pain. Sounds great, right? The catch was that this was controlled by A.L.I.E., the red-dress wearing A.I. who ended the world the first time around. With Jaha’s help, she pedaled the City of Light as a cult-like means of finding peace. But in reality, once you ingest one of her computer chips, it turns you into her zombie-like minion.

At the end of Season 3, Clarke defeated A.L.I.E. and woke everyone from their stupor. In Season 4, everyone has their minds back, but they remember what they did under the influence. Expect some lingering side effects, then. Think of what Angel and Spike were like when they regained their souls on Buffy The Vampire Slayer.

The Balance of Power

Season 3 began with Lexa as the Commander. She was then accidentally killed by her own priest Titus, who was generally The Worst. After her death, the Ice Nation’s Ontari seized control, but the Season 3 finale left her brain dead. That leaves the Ice Nation’s formerly exiled King Roan as the main powerhouse in Polis. Although he had an uneasy alliance with Clarke and Bellamy at the end of Season 3, the Ice Nation is notoriously bellicose. It remains to be seen, then, what this means for Clarke and the gang.

Meanwhile in the Skaikru, the myopic Charles Pike (Michael Beach) sized power and proceeded to dissolve Grounder alliances. In the process, he executed Lincoln. In retaliation, the Season 3 finale saw Octavia execute him. The current ruler of Skaikru is thus up in the air — but now that Clarke and Bellamy are allied again, and Abby and Kane have their minds back, it won’t be complete chaos. For her part, Clarke exists in a liminal space where she is a Sky Person, and yet the Grounders respect and fear her as Wanheda, the Commander of Death. It’s rumored that if you kill her, you’ll have the power she used to destroy the Mountain Men in Season 2.

Aside from Zach McGowan’s King Roan, there are four important characters to note. The first is new character Ilan (Chai Romruen) who blames the Sky People for everything bad that happened with the City of Light. The second is Clarke’s one-night stand, Niylah (Jessica Harmon, the real life sister of Murphy actor Richard Harmon), who mans an important trading post. The third is Echo, (played by Tasya Teles) the Ice Nation Grounder who allied with Bellamy in Season 2.

Unfortunately, recall that in Season 3 she was also responsible for the death of his blink-and-you-miss-her girlfriend Gina. While Season 4 is presenting Echo as an accomplice of King Roan, her relationship with Bellamy will hardly be smooth sailing. That could spell tension between Ice Nation and Skaikru.

Lastly, there is Luna, the last nightblood — the hereditary condition that enables one to become a Commander. Only a Nightblood can take The Flame — which is a fusion of science and religion that dictates who can command — without dying. Incidentally, the flame requires a priest-like Flamekeeper, and Murphy was briefly a pretend priest for several episodes. It was weird.

Luna has dope hair and leads the Boat People, a peaceful society in the middle of the ocean, removed from the horrors of the world. Unfortunately, Clarke inadvertently brought those horrors to her doorstep at the end of Season 3.

Because Bellamy was allied with Pike, Octavia blames him for Lincoln’s death. Their relationship is all but splintered, and Octavia is out for blood. For a time in Season 3, Bellamy and Clarke were on opposite ends of an ideological divide — as Bellamy was aligned with Pike, Clarke with Lexa, and the two had rather different philosophies. But by the beginning of Season 4, they’re getting back to their old dynamic. Between Gina and Lexa, each is recovering from the loss of a lover. Jasper spent most of Season 3 generally being a dick to everyone as he mourned Maya (his girlfriend in Season 2). Monty got together with Harper and reunited with his mother, only to kill her. Miller reunited with his boyfriend Bryan. Most shocking of all, Murphy emerged from the season with, perhaps, the soundest personal life, as he got a girlfriend — the nomad Emori.

And of course, Abby and Kane finally got together — although it remains to be seen how their relationship will hold up considering the fact that Abby had Marcus crucified while under the influence of the City of Light. Bit of a buzzkill.