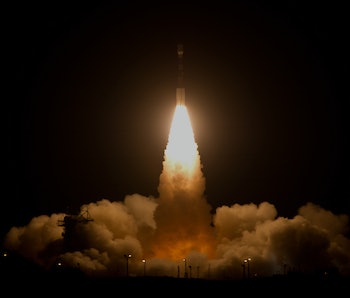 In a Super Bowl ad announcing “OIL EXPLORES SPACE” in bold lettering over a zooming rocket, the American Petroleum Institute attempted to win over the minds of science-loving millennials. Unfortunately for Big Oil, the attempt to convince viewers that oil “powers past impossible” falls flat: While space travel currently relies on fossil fuels, reports from NASA suggest it won’t be that way for long. The space agency predicts that lighter, more potent fuels will power exploration in the future.

Oil is old news: NASA has long focused on hydrogen, the lightest substance known to humankind, as its best bet for fueling deep space exploration. The space agency called liquid hydrogen the “Fuel of Choice for Space Exploration” in an article published in 2015, touting its many advantages over oil-based fuels: Combined with liquid oxygen, it produces a higher-efficiency blast than any oil-based fuel can, and it’s lightweight to boot. To top this, NASA scientists aren’t going to be looking to oil for solutions; they’re going to push hydrogen’s limits even further, instead.

The recent synthesis of metallic hydrogen — the “holy grail” of physics — might be what finally crushes Big Oil’s dreams of becoming essential to the future of space travel. In a previous interview with Inverse, Harvard’s Isaac Silvera, Ph.D., who first reported its discovery, said that metallic hydrogen has the potential to raise the specific impulse of fuel — that’s how rocket scientists measure fuel efficiency — to 1,700 seconds. Given their current liquid hydrogen-based technology, he said, NASA scientists are aiming for a modest increase from 450 to 500 seconds (and liquid hydrogen’s specific impulse is already 30-40 percent higher than that of oil-based fuel). Figuring out how to use metallic hydrogen in space travel will be what powers us past impossible; not oil.

Until that happens, however, certain spacecraft will still rely on RP-1, a dense, kerosene-like propellant made from crude oil. The upside to oil-based, liquid fuels is that they’re relatively easy to store. Liquid hydrogen and its favorite oxidizer, liquid oxygen, need to be kept at an extremely low temperature — minus 423 F — in order to maintain their liquid state, and this sort of refrigeration is tricky and costly. Liquefied gases are also incredibly susceptible to changes in temperature, so once the craft gets to space, it’s important to shield them from sudden increases in heat, or they’ll explode. RP-1 doesn’t require as much delicacy. The downside, of course, is that its specific impulse is lower and its high density can weigh down spacecraft trying to penetrate deep space.

Opening with the line “This ain’t your daddy’s oil,” Big Oil makes its interest in the future clear but fails to consider that millennials might not want oil, period, regardless of whether it’s daddy’s or not. Still, you can’t blame the American Petroleum Institute for wanting to latch onto the idea of deep space exploration, which is one of the few things Americans seem to agree upon. The oil industry won’t be left behind entirely, of course — petroleum-based products are undoubtedly used in rocket components and in lubrication — but it’ll likely be a lot less important to future space exploration than it hopes.