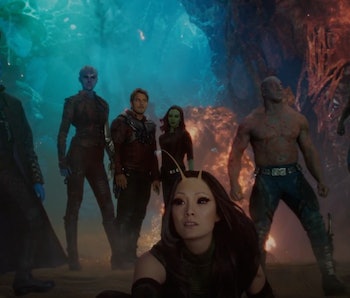 The version of the spot that aired on TV wasn’t the full trailer, which came out on YouTube right when the trailer ended. The minute-long preview mostly showed off the members of the Guardians, and confirmed some new additions to the team without a shadow of a doubt. Yondu, Quill’s old Ravagers boss, has joined the squad, along with Gamora’s formerly evil stepsister, Nebula. A newcomer and fan favorite, Mantis, has also joined the team.

Earlier in the day, director James Gunn hinted that the highly anticipated trailer for Vol. 2 would drop very early into the Super Bowl. “I’m going to start watching Super Bowl stuff at about 3 PST. Just sayin’” he tweeted, coyly. And indeed, the trailer premiered before the National Anthem.

Check out the extended version of the trailer below.

Guardians of the Galaxy Vol. 2 is scheduled for a May 5 release date.