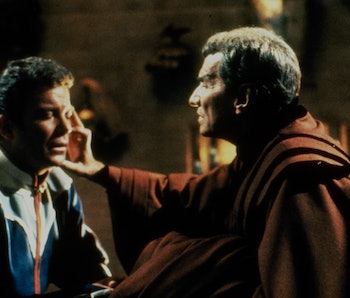 If one single character were to be the representative for the entire Star Trek franchise, that person would undoubtedly be Spock. But, the Spock-less new prequel series, Star Trek: Discovery, is banking on success by featuring the next best thing: his father Sarek. After CBS announced that James Frain will play a younger Sarek in Discovery, the series has dropped a space-anchor that will keep this potentially unwieldy show from veering too far away from established Trek continuity.

The pointy-eared, super-logical alien species known as the Vulcans are part of Star Trek’s zeitgeist DNA, but hugely influential in Trek’s own fictional history, too. In Star Trek’s account of the future, the first aliens humanity makes contact with are the Vulcans. As depicted in the film First Contact — and then later on the TV show Enterprise — the guidance of the Vulcans is both what helped and hindered humanity in the early days of interstellar space flight. Most of the political framework of Star Trek comes from the existence of the United Federation of Planets. In essence, the two most important planets in this alliance are the Earth and Vulcan. And the most politically influential Vulcan of them all is, unquestionably, Sarek.

Though the character only appeared once in the original series episode “Journey to Babel,” Sarek was a fan favorite because anything that helped flesh out the mythology of the Vulcan race was catnip to early Trekkies. Legend has it that at one point, original Sarek actor Mark Lenard’s fan mail briefly exceeded that of Leonard Nimoy’s. Sarek was also in three out of the six original films, in which he briefly mind-melded with Captain Kirk and apologized to Spock for giving him so much shit over the years.

Sarek also appeared on Star Trek: The Next Generation before Spock did. In fact, other than a brief cameo from Dr. “Bones” McCoy in “Encounter at Farpoint,” Sarek was the first character from the classic Trek era to be featured prominently on The Next Generation. He got his own episode called “Sarek,” which is notable for a lot of reasons, but one major plot point hinges on a Mozart recital on the starship Enterprise being a really big fucking deal. He later mind-melded with Captain Picard, who later mind-melded with Spock, which makes any Trekkie cry, even if we just think about these scenes for a second.

So what the hell will Sarek have to do with Discovery? And does his involvement in the show threaten to create continuity problems that will ripple forward and backward across all of Star Trek’s history? The short answer is: no. Having Sarek in Discovery is fine because Vulcans are really good at keeping secrets. Sarek being retroactively tight-lipped about anything that happens in this series is perfectly in-character. It’s also fitting because Sarek is, above all, a diplomat. And, the rumored premise of Discovery is all about the origins of peace treaties between the United Federation of Planets and the Klingon Empire. If you’ve got a secret peace mission, then it make sense Sarek would be involved, even if his ambassador mojo is happening on the down-low.

Sarek is already a renowned Federation ambassador in his first appearance in “Journey to Babel”, and his reputation for making peace only grew from there. By Captain Picard’s time in The Next Generation, the guy is a peace-making god. In the sixth film, The Undiscovered Country, there’s a painting of Sarek hanging next to Abraham Lincoln in a fancy conference room. Point is, if you want a peacemaker in Star Trek, Sarek is your guy.

But there’s intrigue here, too. The Vulcans in the show Enterprise were portrayed as way more duplicitous than those from the rest of the Star Trek. Because Enterprise took place about 100 years before the time of Captain Kirk, it had more wiggle room to show how different the Vulcans were back then. But, Discovery has a smaller gap: It only takes place about ten years before Kirk is in command of the Enterprise, which means it can’t alter too many big plot points. Still, all those Vulcans in Enterprise were good at spying, which is a skill Sarek could retroactively inherit, too. When Star Trek has done secret peace mission stories before, like in TNG’s “Unification,” or the original episode “The Enterprise Incident,” spying and going undercover were almost always conflated with Vulcans. So, not only must Discovery depict Sarek as a peace-seeking and wise character, it could potentially also make him into an altruistic spy.

By taking place so close to the original series, Discovery is beholden to a lot of continuity in Star Trek’s expansive canon. But by bringing in Sarek, it has created an opportunity. Sarek could help add new elements to a beloved mythology, but his presence also lets the show get away with any radical changes. If Star Trek canon is altered in huge ways, fans will be more willing to accept those changes if a very popular character is watching those changes happen, while dispassionately raising one eyebrow.

Here’s everything we know about Star Trek: Discovery.