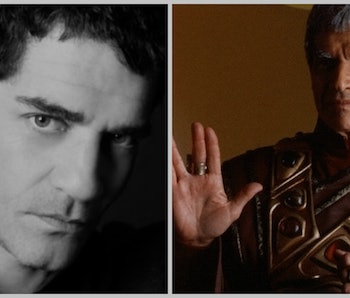 The Vulcan ambassador to the Federation and father of Spock, Sarek of Vulcan, will mediate interstellar conflicts in this year’s Star Trek: Discovery. Actor James Frain will play the Vulcan known as Sarek, a role originated in 1967 by the late Mark Lenard.

Because Discovery takes place ten years before the original series, speculating as to what Sarek is doing is actually easier than trying to place the other new Discovery characters in the timeline. Though he first appeared in the episode “Journey to Babel,” it was later established that Sarek was involved with negotiating various treaties between the United Federation of Planets and the Klingon Empire. If Discovery deals directly with the short-lived shooting war between the Federation and the Klingons, then how Sarek worked out these alliances may specifically be depicted. If the purpose of the USS Discovery is in fact a top-secret peace mission, then it stands to reason Sarek could be a part of the entire operation.

Trekkies shouldn’t hold their breath for Sarek’s son Spock showing up and visiting his dad, though. At this point in the timeline, Spock and Sarek were not on speaking terms. The two reconciled (kinda) after the events of “Journey to Babel.” But, even though Sarek didn’t appear in any other episodes of the original series, he did take the Vulcan philosophy of living long pretty seriously. Sarek appeared in the films Star Trek III, Star Trek IV, and Star Trek VI. He also appeared in the animated series and two episodes of Star Trek: The Next Generation, including one episode titled “Sarek.”

James Frain is actually the fourth actor to play Sarek. While Mark Lenard played Sarek the most, a younger Sarek was played by Jonathan Simpson in Star Trek V: The Final Frontier. Sarek was also recast in the 2009 J.J. Abrams Star Trek where he was played by Ben Cross.

The Hollywood Reporter also revealed on Wednesday that Star Trek: Discovery’s debut date will be pushed back again and will no longer debut in May 2017. “This is an ambitious project,” reps for CBS All Access said, adding, “We will be flexible on a launch date if it’s best for the show. We’ve said from the beginning it’s more important to do this right than to do it fast.”

A new release date for Star Trek: Discovery has not been set. The series begins filming next week.