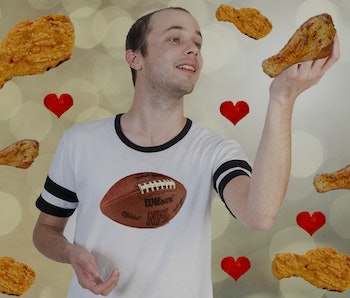 It’s about time to break out the onion dip and glaze the wings, because Super Bowl LI is fast approaching. On Sunday, the New England Patriots will go head-to-head with the Atlanta Falcons in Houston, while the rest of us go head-to-head with our Super Bowl party snack spread. But be careful — according to recent research, people are ten times more likely to go to the hospital during major national events like the Super Bowl for straight-up choking.

In a paper recently published in the journal Gastroenterology Report by scientists from the University of Florida, emergency room data collected over an 11-year period at St. Elizabeth’s Medical Center in Boston revealed a clear pattern: more people seek emergency treatment immediately before or after a major holiday or national event. The main reason people went to the emergency room during these periods of time was because food was impacted in their esophagus. Most commonly, these people were getting mangled by their meat — 50 percent of people choked on turkey, while 29 percent choked on chicken and 21 percent on beef.

The sample size for the study wasn’t large — just 38 people needed an emergency procedure on the esophagus during the study period — but the researchers are confident in their findings because the correlation was much higher during national holidays and events than on other days of the year.

Why all the food-related hospital visits? Lead author Dr. Asim Shuja, a gastroenterologist at UF Health Jacksonville, said in a statement that several factors — serving size, eating speed, and simultaneous booze consumption — are likely to blame.

“We think that the main message here is for people to be aware and not to, for lack of a better term, overindulge,” said Shuja. “Not only the amount of food you’re eating during the holiday or event, but the size of the portion you’re eating can have a tremendous impact.”

And people certainly overindulge during the Super Bowl: A 2016 study found that if you calculated the number of calories per serving households purchase in the week before the Super Bowl, it’s the largest amount of calories purchased of the year. This week is also when people throw down the most cash at the grocery store, spending an average of $150 on all the goodies. Mix all that food with the fact that people are 56 percent more likely to overeat if they’re munching from those big serving bowls you’ll find at a party, and you’ve got a meat-choking emergency waiting in the wings.

More like this
Science
Jan. 21, 2023
Can spicy foods cure colds? A neuroscientist reveals the encouraging truth
By Elana Spivack
Mind and Body
Jan. 23, 2023
Cutting back on deli meats may lower your risk of this chronic illness
By Elana Spivack
Science
17 hours ago
Look! New JWST Shows a Billion-Year-Old Spiral Galaxy in Stunning Detail
By Kiona Smith
LEARN SOMETHING NEW EVERY DAY.
Related Tags
Share: