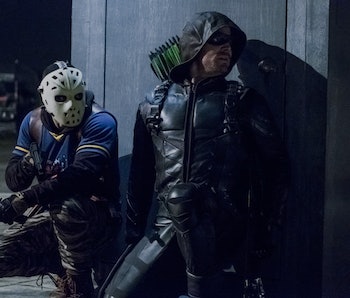 Halfway through Season 5 and all the new members of Team Arrow have had plenty of their background revealed, except for Wild Dog. But in an upcoming episode of Arrow titled “Spectre of the Gun,” Rene Ramirez (Rick Gonzalez) will, at last, get his focus. And judging by the episode title, things already sound ominous.

In an episode summary released by the CW, “Spectre of the Gun,” written by co-executive producer Marc Guggenheim which airs February 15, will begin with an attack on City Hall that “triggers painful memories” for Rene. Departing from the usual flashbacks to Oliver Queen’s time with the Russian mafia, the episode’s flashbacks will revolve around Rene’s evolution from “simple family man to a hero named Wild Dog.”

“Spectre of the Gun” will no doubt be a sad origin story, but it’s also a departure from the original Wild Dog from DC. Introduced in 1987 by Max Allen Collins and Terry Beatty, Wild Dog wasn’t Rene Ramirez but Jack Wheeler, a collegiate athlete who lost his scholarship after an injury. After serving in the U.S. Marine Corps, Jack Wheeler comes home to Quad City, but his girlfriend is killed by a Chicago mob boss. Suiting up in a makeshift costume, “Wild Dog” hits the streets looking for revenge, and gets his name when a SWAT captain orders Jack be shot “like a wild dog.”

Wild Dog’s origin from the comics is pretty grim stuff, which made him suited for Arrow despite his Z-list status. Things will be different for Wild Dog in Arrow, but with a title like “Spectre of the Gun,” it still won’t be pretty.

Arrow airs Wednesdays on the CW.