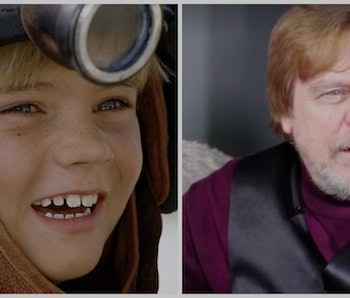 Before Darth Vader was rocking the coolest dad bod in the galaxy, he started life as a whiny kid who seemingly everyone hated. But now, Anakin Skywalker’s son is taking aim at father’s critics: Mark Hamill himself thinks everyone needs to chill out with their hate of the Star Wars prequels.

“I’m still angry at the way they treated Jake Lloyd,” Mark Hamill said in a video interview with Vulture. “He was only ten years old, that boy, and he did exactly what George [Lucas] wanted him to do.” Hamill also took issue with the level of scorn saying fans went way “beyond” saying, “I didn’t like it.” Without saying he himself likes the prequels, Hamill was dismissive of the intensity of those who said the prequels “ruined their childhood” too. “It’s just brutal,” the actor said.

Mark Hamill’s comments should come as no surprise. Other than the fact that hating the Star Wars prequels might be an unhealthy addiction of certain kinds of fans, the amount of public scorn the films garner is objectively, totally absurd, at least relative to their flaws.

Saying the prequels are bad is one thing, saying they ruined anyone’s childhood, could be seen — as Hamill is pointing out — as dangerous hyperbole. Who knows, maybe George Lucas depicted Anakin Skywalker literally murdering children in Revenge of the Sith to intentionally show his critics what he thought of their battle cries.

Mark Hamill also mentioned he “loved” George Lucas, and that he didn’t like taking his complaints about Star Wars “outside the family.” The actor did not reveal any plot points about what Luke Skywalker is up to in The Last Jedi.