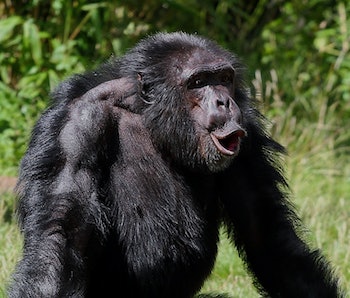 The ongoing chaos in the American political arena would play out very differently if we were a society of chimpanzees. Researchers from Iowa State University recently found a group of great apes that beat up, murdered, and cannibalized a chimp that had once been a tyrannical, prominent “alpha male.” As they describe in a new study, the gruesome discovery sheds light on what factors lead to an unstable society in chimp world.

The researchers, who had been following this group of Senegalese chimpanzees since 2001, recently found that a male chimp they named Foudouko had been brutally killed — and eaten by one female member of the group — after returning to his tribe as a former bully. This savage event was described in their new paper in the International Journal of Primatology as an important insight into how chimpanzees form coalitions for lethal aggression.

As lead author Julia Pruetz, Ph.D., noted in an interview with New Scientist, Foudouko was “somewhat of a tyrant” as an alpha male. When her team first started following the group, Foudouko was the alpha male and led with his second-in-command, the beta male Mamadou. They studied the social hierarchy by listening for “pant-grunting,” a form of communication between chimps: Only subordinates ever pant-grunted to dominants, so the least pant-grunty male was likely to be the dominant.

But a few years into their research, Mamadou was injured and had to remove himself from the group. The former tyrant Foudouko, it seems, stayed loyal to his ally and paid the price for it; because he maintained ties to a weakened partner, he too was eventually shunned. Over the years, as Foudouko tried to re-enter the hierarchy, he repeatedly got ostracized and beat up by the five young males that were also rising in society. In 2013, the struggle came to a horrific end: Foudouko was found dead, with bloody injuries to his foot and back and a torn anus, together with many internal injuries.

Even after he died, Foudouko’s peers continued to beat his corpse with rocks and sticks. One older female, an apparent chimpanzee Hannibal Lecter, “appeared to try to bite off the penis several times,” the authors write.

This violent situation struck the researchers as especially odd because adult male peripheralization is “rarely reported in the literature” and this particular subspecies of chimpanzee (West African, as opposed to those from the East) has shown “relatively little lethal coalitionary aggression” in the past. What was different about this group, with its especially unstable male social hierarchy, was the abnormally low number of females in the group.

That heated competition between alpha males would lead to in-group violence seems like a natural conclusion, but because this situation involved lethal violence it is a particularly unique event. Still, the question of why chimps kill remains up for debate: While some scientists believe it gives them a purely adaptive advantage — that is, it allows them to mate and pass on their genes — others argue that they’ve only really started killing each other because they are stressed by the activity of humans, as an article in Science pointed out in 2014.

This debate has, naturally, led to some speculation about why humans kill. A purely adaptive explanation would have scary implications for our species, but luckily we’ve got better ways of dealing with conflict: It’s our better developed social skills that keep us from going wild.

More like this
Science
12 hours ago
The wildest sci-fi thriller on Amazon Prime reveals a real-life threat
By Tara Yarlagadda
Science
8.18.2022 11:15 AM
Artemis SLS on the launchpad and more: Understand the world through 7 images
By Robin Bea
Science
8.17.2022 6:00 PM
Watch squealing dolphins hunt fish and snakes from their point of view
By Jennifer Walter
Related Tags
Share: