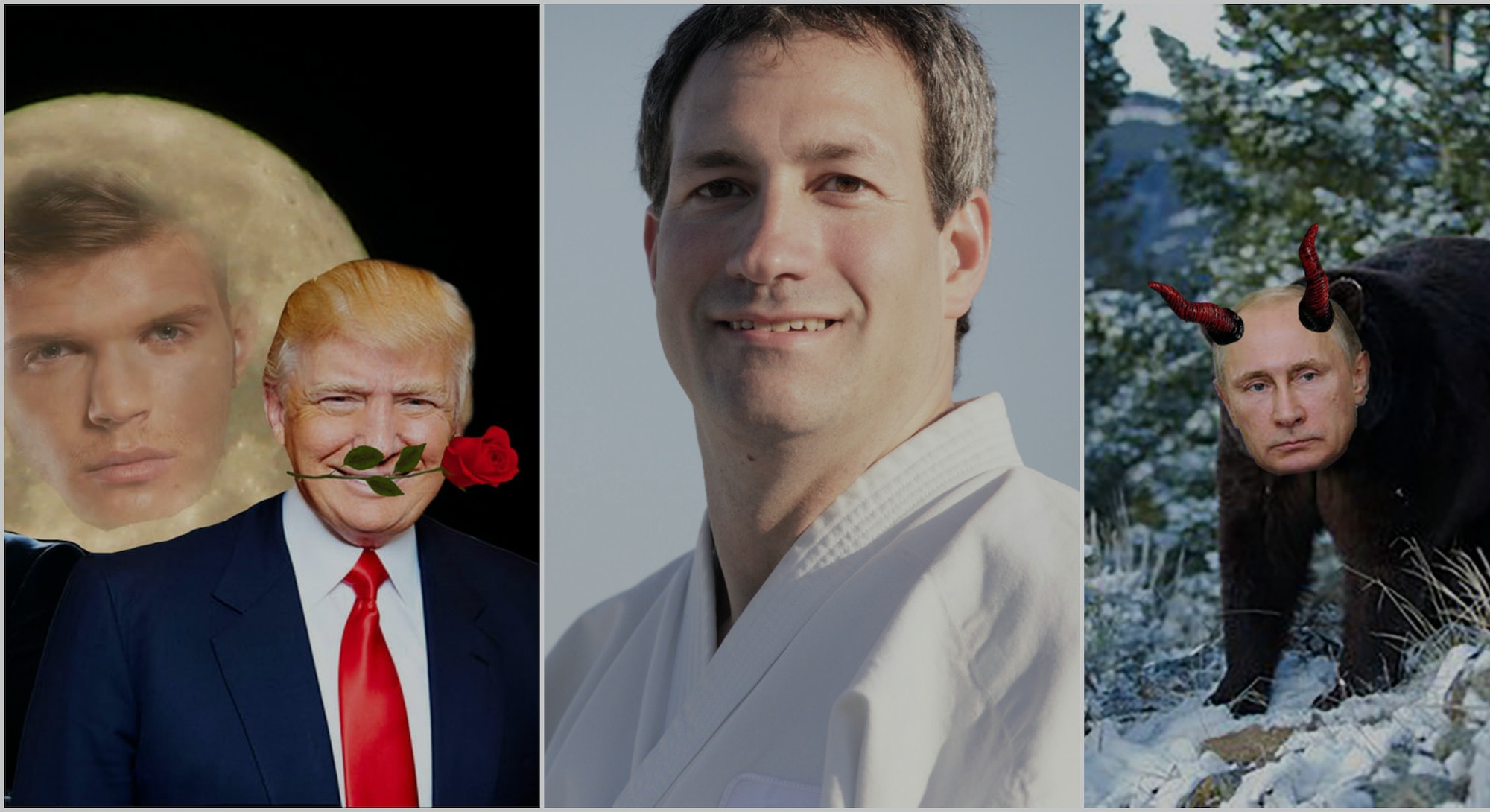 Creative genius Chuck Tingle made a kind of silly name for himself penning steamy dinosaur erotica. Then he leveraged his internet ubiquity to distribute his excellent 2016 short story Space Raptor Butt Invasion, which was nominated for a prestigious Hugo Award. That was a resounding success, but his lesser works — Domald Tromp Pounded In The Butt By The Handsome Russian T-Rex Who Also Peed On His Butt And Then Blackmailed Him With The Videos Of His Butt Getting Peed On and Handsome Sentient Food Pounds My Butt And Turns Me Gay: Eight Tales Of Hot Food — also deliver on their unique premises. Tingle is, in short, a prose stylist tapped into the zeitgeist.

He’s also (sort of) an activist. His new endeavor Buttbart is a satirical takedown of Steve Bannon’s ethnic nationalist news site Breitbart. On his version of the propaganda-web, Tingle promises “the finest alternate realities from across the deepest timeline layers.” In fact, he “sells” alternative facts, but the buy button is a redirect to Planned Parenthood.

Curious about his new project, Inverse sent Tingle an email full of questions. In return, we received something that might easily be mistaken for a masterpiece. Why? Because Chuck Tingle gets it and Chuck Tingle cares.

What was the inspiration behind Buttbart?

inspiration of BUTTBART is to have site where we can prove love is real by giving a REAL NEWS source to all buckaroos who exhist on multiple timelines. it is an important want to combat DOM TROMP as he takes facts from other timelines as well and sometimes he even just makes them up. this is a common way of The Void. so now it is important that we come togeather as buckaroos of all kinds and PROVE THAT LOVE IS REAL sometimes by laughing and sometimes by crying but mostly by trotting togeather. this is a good way and this is why i made important website so that we can have online trots.

I could imagine some people are unhappy about Buttbart. Have you gotten any pushback?

i do not understand this way of PUSHBACK but if this means ‘are the devils riled up?’ then anwser is YES but the thing about devils is they are always riled, that is what makes them scoundrels in the first place because they are so bored and upset with themselves and they think ‘it would be so neat if i made this timeline worse for others so they could feel sad like me’. that is why us buckaroos need to stick togeather and prove love. COOL THING IS now devils are feeling kinda funny because they used to think they were being puck rockers (they wernt they were just being sad boys in the basement) but now the real punk rockers and buckaroos out TROTTING WITH LOVE and telling dom tromp to go back to The Void. it is not cool to be a devil now everybody knows that, cool punk rockers fight for joy and cute trots and PROVE LOVE IS REAL.

Jon Tingle is listed as one of the site’s editors. Who is this mysterious man?

thank you jon tingle is my handsome son (name of jon) he is so handsome he has a winning personality and he goes to the gym sometimes but mostly he watches movies with his FIANCE name of CLOWY (she has a kind way we are best friends). one day i hope that son name of jon thinks ‘i am so proud of my dad chuck’ that would be THE BEST WAY he has said that before but it is nice to hear it again.

How did you think up the alternative fact for sale? Why did you choose Planned Parenthood as the recipient of these donations?

well alternative facts for sale on BUTTBART were not thought up they are just the facts of the closest timeline so that is where i got them. i am very expirenced with moving between layers of THE TINGLEVERSE but it is still a dangerous way you can get stuck between timelines as a shaking and drooling man especially if timelines are close to The Void (this is also a way of cosmic horror that buckaroos should avoid as it can lead to hand removal or an unforseen Void Crab feeding ground) so that is why i decided to stick with close timelines that would not be as dangerous and that is where I found these FACTS of alternate realities. reason i chose place of PLANNED PARENTHOOD for donations is because they do good services for ladybucks and me and CLOWY went to big time trot in town name of HELENA MONTANA so that was a very inspiring way. it was such a good way to trot on that day it made me shed a tear as a buckaroo and i thought it would be a nice way to help all kinds of bucks who are in need of HEALTH (this means all of us) thanks

We heard about your video game project with Zoë Quinn. How’s that going?

very good i have talked to the BIG TIME TEAM OF VIDEOGAME BUCKS sometimes and they message me and ask about the way of the tingleverse i am so glad to help them. mostly they just take ideas of The Buckaroo Lifestyle and make it into a big time game. i am not involved in DAY TO DAY WAYS but i believe they are trying to prove love so i know that it will be such a nice way when it is done. it will make HEARTS SING and big time game will kiss the sky.

These are dark times in America right now. What’s important for people to remember?

yes i would like to say that right now is SUCH AN IMPORTANT TIME TO PROVE LOVE i know it can be easy to think ‘im just a dang worm in a hole looking for dirt (this is metafore you are not a wormman) but really your way is SO IMPORTANT AND SO SPEICAL. some bucks are afraid of their unique way but they do not understand that having a unique way is their most powerful weapon in the fight against devils. the most powerful thing about you is that there is ONLY ONE OF YOU this is why your reverse twin is so jealous. so anyway it is the best time ever to PROVE LOVE IS REAL because now we are all proving love like punk rockers on a motorcycle saying ‘get on bud, lets go horse around and make devils jealous of our cute trots’

This interview has not been edited for brevity and clarity, but instead for honesty and truth by way of alternative grammar and LOVE.