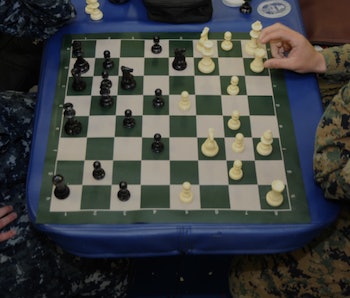 In 2008, professional chess grandmaster Vassily Ivanchuk lost a game, then was immediately asked to provide a urine sample for a drug test. Ivanchuk flipped out — he kicked a concrete pillar and pounded a cafeteria countertop — insulted that he would be asked to do something so demeaning after his loss. His fans and other players rallied to support him, the argument being that doping couldn’t help a chess player. Turns out those dopes were wrong.

According to a new study in the journal European Neuropsychopharmacology, two prescription drugs can help chess players compete: modafinil and methylphenidate. The former is sold as Alertec, Modavigil, and Provigil, and the other is best known as Ritalin. Participants in the study were dosed with these drugs, and then their chess playing abilities were observed. While the drugs resulted in test subjects playing more slowly, they also increased their performance. Using modafinil improved player’s results by 15 percent, while methylphenidate improved results by 13 percent.

The fact that these drugs slowed down gameplay is the crux of why they help player performance.

“This suggests that neuroenhancers do not enhance the quality of thinking and decision-making per time unit,” the authors write, “but improve the player’s ability or willingness to spend more time on a decision and hence to perform more through calculations.”

To determine this, researchers had 39 male chess players play 20 games of chess against a chess program called Fritz. Before each game they were given one of the drugs or a placebo, and played the game for 15 minutes. Neurological testing revealed that the stimulants triggered a more reflective decision-making process. When the researchers gave some of the players less time to play, they found that the effect of the drugs diminished — it was only when there wasn’t enforced time pressure that they displayed enhanced performance.

This means that these drugs would only benefit players playing in a classic tournament instead of speed chess. But when the performance of players on one of the drugs was compared to players who just got the placebo, it was obvious that there was an improvement.

Not that this is any reason for budding chess prodigies to start doing drugs: It’s unhealthy and will likely be prohibited by chess leagues in the future. “Their use may cause severe side effects and dependency, especially with repeated use,” study co-author Dr. Klaus Lieb told World Chess. “We recommend to introduce rigorous doping controls in chess competitions.”

International chess tournaments began incorporating drug testing in 2001, and despite some drama (like the situation with Ivanchuk) no one has been convicted yet. FIDE, the world chess governing body, is a part of the International Olympic Committee, and that relationship means players have to stick to the World Anti-Doping Agency rules. Doped-up chess players have mostly been the subject of ridicule — but this study adds credence to the idea that chess players should be tested for performance-enhancing drugs.

If you’re thinking about jumping into international chess competitions and don’t want to dope but still want a leg up, there is some good news: Just drink some coffee. This study also found that caffeine improved performances by 9 percent.

More like this
Innovation
Jan. 16, 2023
3D-printed “organs” could lead to better drugs
By The Conversation and Chengpeng Chen
Science
Jan. 28, 2023
How does the placebo effect take hold? A doctor explains two influential factors
By Kathryn T. Hall. and The Reader
Science
18 hours ago
This nuclear-powered X-ray “flashlight” may help scientists probe the Moon for water
By Andy Tomaswick and Universe Today
LEARN SOMETHING NEW EVERY DAY.
Related Tags
Share: