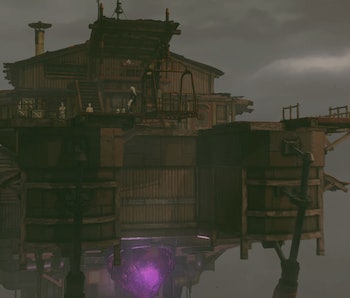 When you start playing through the opening act of Gravity Rush 2’s story, you’ll participate in a few missions where you’ll join members of the settlement to mine ore from select locations. Mining ore yields bright pink gems referred to as Precious Gems, which serve as the currency of Gravity Rush 2. These gems allow you to upgrade Kat’s various abilities and powers throughout the game but increase tremendously in cost the further you progress down a specific tree. That is why mining early is good for you.

Unfortunately, many of the missions in Gravity Rush 2 don’t reward you with large amounts of Precious Gems to spend on upgrades, which means you’ll have to explore the open world to collect them and grind for them by joining Misai on mining trips. Since these are easy to miss provided you aren’t completing side quests, here’s how to unlock and make the most of them early on within Gravity Rush 2.

How to Unlock the Mining Boat

Once you’ve completed the main story mission which brings you to the Forbidden Land in search of ore for the Banga Settlement, you’ll be dropped back into the settlement and set free to talk to the locals or progress through a few new quests. One of these, “Fly Me to the Storm,” is marked in blue. Head over to the location and speak with Misai to begin. He’ll ask you to join him on a run to survey a potential mining site, which Kat will naturally agree to before setting off with the crew of the mining boat.

The mission itself is relatively simple. You have to escort Misai to a few different mining locations using your Stasis Field ability, protect him from any enemies that pop up, and mine a few Precious Gems yourself. You won’t retain any gems you collect, so don’t feel the need to collect from every piece of ore. After you’ve completed it, a short cutscene will trigger and you’ll be back at the Banga Settlement with the ability to go on additional mining trips.

Getting back into a mining location is easy no matter where you find yourself in Gravity Rush 2, just head back to the mining boat on the in-game map (usually marked with a propeller of some sort) and speak with Misai to bring up a list of mining sites. Each of these will be marked with a Gravity Concentration, Minable Volume, and Current Mining Population. Ideally, you want to head to a site with rich ore deposits and a high mining population to farm the most Precious Gems without having to relocate to a new site.

When you arrive at the mining site of your choice, head over to the crane at the front of the mining boat and Misai will lower you down into the area to begin. Once you’re below you can start shattering the ore nodes scattered about to farm the Precious Gems you’ll need to upgrade Kat’s various abilities. Usually, there’s no time limit or restrictions on a mining site, so make sure to check every square inch of the location for ore deposits you can break open before leaving.

While you can walk around on the ground and mine ore with Kat’s standard melee attacks, I found it much faster to use her Gravity Kicks to farm ore in open areas of the map. No matter how you approach it, it’s going to be a grind to unlock all of Kat’s abilities, but one well worth the trouble given how much they help in difficult combat situations.