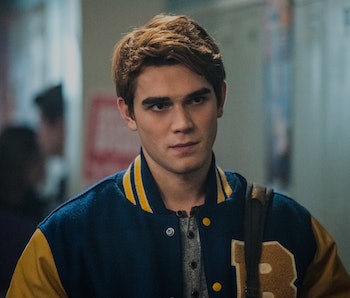 The CW’s new edgy noir spin on the Archie comics, Riverdale, is exactly what it looks like: Sexy Archie. The pilot episode, “Chapter One: The River’s Edge,” is essentially a Lana Del Rey music video made into a show.

In the pilot alone, Betty and Veronica make out at cheerleading tryouts, Archie fucks a teacher and agonizes over how football interferes with his musical aspirations, and a hookup between Betty’s Token Gay Friend, Kevin Keller, and a closeted football player gets interrupted when they stumble upon a dead body.

Hot and bothered antics aside, the dialogue is dripping with a mind-boggling array of pop culture references, with lines like “Can’t we, in this post-James Franco world, be all things at once?” or “You should be the queen Bey of this drab Hive.” At various times, other characters describe Archie (played by K.J. Apa) as “teen Outlander” and “Red-headed Ansel Elgort.” This show is hip to the #Teens these days, damn it, and it wants you to know it. Just to prove it, yes, in case you were wondering, when we later hear a snippet of Archie’s soulful music, it sounds like it should play at the Bronze in Buffy the Vampire Slayer.

Kevin Keller (Casey Cott), might seem like a TV-only character for those who haven’t kept up with Archie comics, but he was first introduced in 2010 in Veronica #202. Keller gets to deliver natural-sounding dialogue like “Archie’s swell, but like most millennial straight guys, he needs to be told what he wants.” At one point, when he asks Cheryl Blossom (Madelaine Petsch) if cheerleading is still a thing, she counters with, “Is being the gay best friend still a thing?” Well, Riverdale, is it?

Blossom is a one-note Regina George type whose most interesting trait is the fact that her twin brother is dead. It’s his body that Keller and his would-be hookup find at end of the episode, setting up the ostensible plot for the series to come.

Depending on how you look at it, Riverdale is either a sly twist on the Edgy Teen Show or the genre stretched to its unfortunate limit. There are promising signs of winking self-awareness — Keller gets another line that functions as a meta-nod to shipping culture in modern fandom (“Betty and Archie aren’t dating, but they are endgame”) and the Betty and Veronica kiss ends with an unimpressed Cheryl Blossom proclaiming, “Faux lesbian kissing hasn’t been taboo since 1994.” Yet at the same time, here Riverdale is, milking the moment for everything it’s worth.

If Riverdale’s self-conscious, heavy-handed writing is the right type of corny for you (and if you can withstand the radioactive glare of Archie’s fire-engine red hair), the dead-body episode closer should hook you for another week at least.