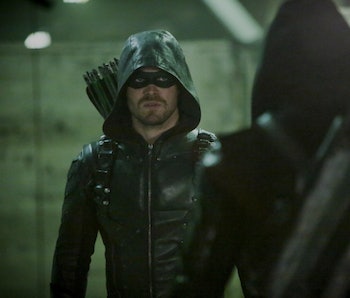 It’s time to return to Star City. The second half of Arrow’s fifth season will premiere on January 25, and the show will waste no time addressing the mid season cliffhanger with Laurel Lance (Katie Cassidy) and her “return.” There’s also the matter of Artemis having turned her back on Team Arrow, the dangerous Vigilante still on the loose, as well as Prometheus and whatever his end game will be. With months since the last time we saw Arrow, here is a brief refresher on all the important details to remember.

Black Canary is back! Or maybe not. At the end of “What We Leave Behind,” an exhausted Oliver Queen (Stephen Amell) finds Laurel, alive and well in the Arrow Cave. But is it her?

Actually, no. This is no spoiler: In the teaser trailer for the episode, “Who Are You?” a hostile Laurel uses the Canary Cry in the Arrow Cave, injuring her former “teammates.” When Oliver remarks, “That’s not our Laurel,” a sassy Laurel replies: “Finally, it’s about time someone figured it out.”

All signs point that it’s not Laurel but Black Siren, the rogue Earth-2 doppelgänger of Laurel who also had the Canary Cry. Black Siren fought the Flash last season on (what else?) The Flash, and her existence was kept secret from everyone at Team Arrow. This will obviously come back to bite everyone in the ass now that Black Siren has, somehow, escaped.

Diggle spent most of Season 5 a fugitive but was recaptured in “What We Leave Behind.” In the trailer, Diggle says he’s done running and will fight the forces that want him grounded head-on. Team Arrow will lose their Spartan as he faces a court martial, but the arc will culminate in Episode 12, which is set to premiere on February 8. “This is the start of a storyline that’s actually going to carry us through episode 512,” said Executive Producer Marc Guggenheim in an interview. “There’s going to be a long tail storyline that we’re doing with Dig this year.”

Curtis (Echo Kellum), aka Mr. Terrific, is now living the single life after his husband learned his true second life as a vigilante, a fatal walk of life that only ends one way in Star City. It’s a minor update, but if Curtis is emotionally distraught or even trying to rebound, his superhero life is why.

Vigilante is still out there …

Knowledgeable fans already know the identity of Vigilante, a new gun-toting — erm, vigilante — in Star City. The Green Arrow and his team have yet to apprehend him and keep him off the streets, but crossovers to fight alien invasions have kept them busy. Adrian Chase (Josh Segarra), the new district attorney who moonlights as Vigilante (or fans are willing to bet), will pursue the Detective Malone’s killer which he’s confident is the Green Arrow. If only he knew the whole truth.

… and so is Prometheus.

Prometheus managed to turn Evelyn Sharpe (Madison McLaughlin) against her team, but that’s not the only bit of misdirection in Prometheus’s efforts to make Oliver wish he were dead. The mid season finale strongly hinted that Prometheus was the illegitimate son of Justin Claybourne, a despicable pharmaceutical CEO on “The List” from way back in Season 1. But with Prometheus still unmasked, it’s anyone’s guess if there’s another layer underneath the mind games.

Arrow will return January 25 to the CW.