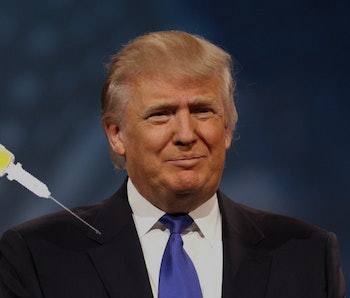 Like an intelligence-killing virus, susceptibility to fake news has spread contagiously throughout the media-consuming public. This seems to have no upside — especially in an age of alternative facts.

But in a new study published in the journal Global Reports, social psychologists from the University of Cambridge announced their success in “inoculating” readers against fake news by exposing them to small amounts of it, coupled together with a brief explanation about how certain groups may use “distortion tactics” to misinterpret the truth.

“The idea is to provide a cognitive repertoire that helps build up resistance to misinformation, so the next time people come across it they are less susceptible,” said the study’s lead author, Cambridge Social Decision-Making Lab director Sander van der Linden, Ph.D., in a release.

When scientists design vaccines against viruses such as measles or the flu, they take a small piece of the virus, weaken it, then re-inject it into a person’s body, thereby presenting the immune system with an enemy it can defeat and — crucially — recognize in the future. Following this cue, the Cambridge researchers tested the ability of a “fake news vaccine” — a bit of misinformation about climate change, coupled with a brief explanation of how some groups are known to twist the truth — to modify people’s opinions and protect against the effects of exposure to fake news in the future.

The researchers exposed 2,000 participants in an online survey to one of two pieces of information: Some were presented with the widely held, false belief that “there is no consensus among scientists about climate change,” while others were told the evidence-based statement that “97% of scientists agree on manmade climate change.”

To measure any shifts in opinion, participants were asked to estimate how much scientists actually agreed on climate change. People who read only the first statement about there being no consensus among scientists regarding climate change reported, on average, a 9-point decrease in their belief in a scientific consensus. Those who read the second statement, in contrast, noted a 20-point increase in their belief. Exposure to both statements seemed to result in a counterbalancing effect; changes in opinion differed by only 0.5 points. While this last finding surprised the scientists, the most exciting part of their research was discovering what happened when they presented each statement with a vaccine — short warnings about how fake news can be created.

Vaccines came in two varieties: The “general” type, which warned that “some politically-motivated groups use misleading tactics to try and convince the public that there is a lot of disagreement among scientists,” and the “detailed” type, which outlined the reasons why the false statement about the lack of consensus among scientists wasn’t true. When their effects on the participants’ opinions about scientific consensus on climate change were assessed, the general vaccine resulted in an average 6.5-point opinion shift toward believing in a scientific consensus, and the detailed type led to an increase of 13 points, even after people were exposed to the false statements.

Better still is that the positive effect of the vaccination was both preserved over time and didn’t “backfire” among people predisposed to doubt climate science. The bottom line, van der Linden explains, is that people’s opinions aren’t necessarily fixed, despite how intractable current political views may currently seem, and that their “vaccination” techniques can and should be applied for the public good.

His team notes, however, that this strategy can be twisted to achieve opposing goals: the tobacco and fossil fuel industries, for example, have used inoculation to cause people to doubt statements that are backed by science. In an era rife with misinformation, what “truth” unfortunately comes down to is how people define “fake” — and in light of this, vaccination, though promising, can still backfire if used incorrectly.