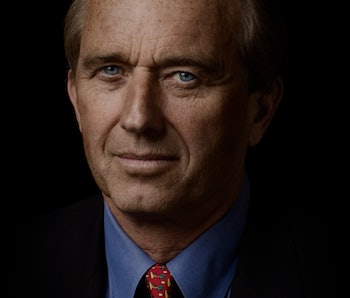 In April 2015, Robert Kennedy Jr. was stumping for the anti-vaccine film Trace Amounts in Sacramento. On stage at the Crest Theater, he linked autism to the vaccine preservative thimerosal and claimed that the government could put anything it wanted into vaccines without retribution.

“They get the shot, that night they have a fever of a hundred and three, they go to sleep, and three months later their brain is gone,” Kennedy told the crowd to a standing ovation. “This is a holocaust, what this is doing to our country.”

Less than a week later he apologized. Holocaust wasn’t the right word to use. Kennedy had merely struggled to “find an expression to convey the catastrophic tragedy of autism.” What Kennedy wasn’t apologizing for was linking vaccines to autism. That, he believed was science and, as he has repetitively said since he began to publicly question vaccines, Kennedy believes himself to be a man of science.

On Tuesday, Kennedy was asked by the person about to be appointed to the nation’s highest office to head the to-be-formed “commission on vaccination safety and scientific integrity.” Kennedy accepted — after all, this is validation of what he has been saying all along. He knows science, he has “always loved science” and is “comfortable reading it”. It doesn’t matter that the scientific community overwhelmingly concurs that vaccines are not linked to autism. Kennedy still has questions and so does President-elect Donald Trump.

Kennedy is right: The science does matter. And the fact that someone who blatantly ignores science and is now steering the national conversation on vaccines is extremely dangerous.

That Kennedy is “pro-vaccine” is a phrase he often employs when explaining why he doesn’t trust vaccines. In a YouTube video made at the request of the Honorable Minister Louis Farrakhan, the leader of the Nation of Islam who believes vaccines are “killing off” the black community, Kennedy appealed to his audience that:

“I want to start off by saying this, and I want to say it emphatically: I am pro-vaccine, I have always been fiercely pro-vaccine; I had all six of my children vaccinated. And I believe that we ought to have policies that encourage full vaccinations for all Americans. But to accomplish that goal, we need a honest regulatory system, we need a transparent process, and we need vaccines that all of us know are safe — the safest possible vaccines. We do not have those things today.”

What Kennedy is most concerned about is thimerosal, a mercury-containing compound that prevents the growth of bacteria and fungus and exists in trace amounts in vaccines. His fight against thimerosal is a part of his recently launched World Mercury Project, which is “dedicated to ending exposure to neurotoxic mercury in fish, medical products, dental amalgams, and vaccines.”

But in reality, no recommended childhood vaccines contain thimerosal as a preservative. In 1999 the U.S. Public Health Service decided to remove thimerosal as a preservative in vaccines for infants — not because there are any connections between thimerosal and autism, but as a precautionary measure and a way to give a piece of mind to the growing number of parents in the 1990’s concerned about mercury. Furthermore, the mercury in thimerosal is not the same mercury you might find in fish or old dental fillings. Thimerosal contains low levels of ethylmercury, not methylmercury, which according to the CDC are “broken down by the body different and clear out of the blood more quickly than methylmercury.”

Perhaps more important, regardless of these factors, is the fact that thimerosal in vaccines is still not connected to the development of autism. There are no reputable studies linking rates of autism to vaccines. The science just isn’t there.

As for the President-elect, you can determine how “pro-vaccine” he is from his tweets:

The choice to not only form a “commission on vaccination safety and scientific integrity” but then place it in the charge of an anti-vaxxer comes with real and terrifying implications. Peter Hotez, dean of the National School of Tropical Medicine at Baylor College of Medicine, tells The Washington Post that it’s “very frightening; it’s difficult to imagine anyone less qualified to serve on a commission for vaccine science.” William Schaffner, a preventative medicine professor at Vanderbilt University, tells the New York Times that “I frankly find it frightening” and “this is going to be a sad struggle as we try to protect as many children as possible.”

For now, this fear is based in the reality that giving Kennedy this position of power validates the suspicion to question vaccines. And questioning vaccines comes with real consequences: Look no further than Los Angeles, California in 2015, where a measles outbreak spread out in areas where vaccination rates were only between 50 and 86 percent.

The Trump administration is continuously proving to be a dangerous one for science and for truth. The sad news for Kennedy is that he still thinks he’s playing for the right side.

More like this
Science
7.27.2022 5:17 PM
No, this newly discovered fossil doesn’t make the Loch Ness Monster 'plausible'
By John Wenz
Science
8.5.2022 6:00 PM
How is nature connected to well-being? It's complicated, scientists say
By Tara Yarlagadda
Science
8.5.2022 1:00 PM
The most miraculous sci-fi movie on Netflix reveals a scientific debate over aging
By Tara Yarlagadda
Related Tags
Share: