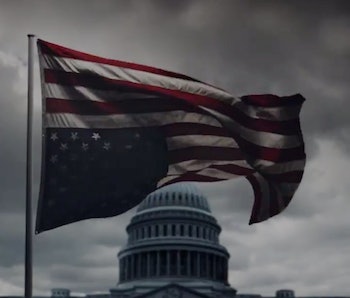 Emotions are riding high on Inauguration Day now that Donald Trump has officially become the President of the United States. So, naturally, Netflix thought it would be a good idea to capitalize on people’s very real fears of what a Trump presidency means for their health care, rights, and the environment by shilling House of Cards.

The trailer, which dropped on Twitter at 10:30 a.m. Eastern on Friday, features a shot of an upside-down American flag waving in front of the Capitol, accompanied by a creepy soundtrack and reading of the Pledge of Allegiance. The tagline for the trailer is “we make the terror,” which, like this whole endeavor, seems more than a little tasteless.

House of Cards’s main problem is that the show, which started out okay and then went downhill extremely quickly, is utterly irrelevant now that Trump is president. Trump’s alleged connections and definite coziness with Russia, not to mention his past sexual predation, far outpace anything that Kevin Spacey’s Frank Underwood can throw at viewers. (Though I will concede that Trump has never pushed anyone in front of a train — as far as we know.)

With reality being as insane and unpredictable as it is — seriously, a former reality TV show host who led a campaign claiming Barack Obama wasn’t born in America and bragged about sexual assault on camera is the president — it’s telling that Netflix needs to piggyback its supposedly dystopian view of Washington, D.C. on the real deal.

More like this
Entertainment
8.4.2022 7:00 AM
The Sandman release date, time, plot, cast, and trailer for Netflix's dark fantasy series
By Jeff Spry
Culture
8.9.2022 10:00 AM
The Sandman: 11 characters pulled from DC comics history
By Robin Bea
Entertainment
8.12.2022 11:00 AM
Neil Gaiman teases a Sandman prequel on Netflix. Here's what that means.
By Mónica Marie Zorrilla
Related Tags
Share: