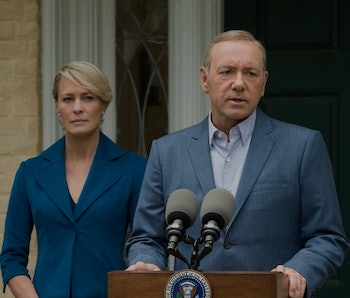 “That’s right, we don’t submit to terror… we make the terror,” Frank Underwood says to the camera in the final acts of House of Cards’ Season 4. The second half of the show’s season — in which Frank and Claire reconcile and reform as an evil conglomerate — is full of similarly hardboiled, Chuck Palahniuk-ish lines. Spacey regales us with gory tales of slain Roman generals. Later, Frank says to Claire: “We’re going to destroy them,” referring to every opponent they’ve ever had. “Yes, we are,” she murmurs back, cruelly. It was really only a matter of time before House of Cards turned into Fight Club. It’s no longer clear if the show is chuckling at itself anymore — increasingly, it feels like it never has.

The second half of Season 4 is better than the first. Robin Wright directed two very strong episodes, which have a more emotionally barren quality than anything we’ve seen on the show. Claire’s inner pain and self-repression bubbles to the surface, but then, the dark energy is channeled back into the Underwood empire — and making the biggest bid for power of Claire’s career. Yet with greater rewards come greater risks. As journalist Tom Hammerschmidt’s case against Frank strengthens — and Frank finds himself powerless to stop it — it looks increasingly like a suicide mission for the couple. The only alternative? Go to war to cover it up. And that is the context for the comically dramatic “terror” line; Spacey and Wright are literally in the war room.

Of course, we wish it had gone another way — that Hammerschmidt could have taken Frank to task for Peter and Zoe. Instead, we just got them as the sexualized ghosts in Frank’s coma dream (Kevin Finnerty much?). A lot of time is devoted to a lamely rendered pseudo-ISIS terrorist cell no one could possibly care less about, and too much screen time allocated to an only reasonably interesting character, Republican candidate Will Conway (played by Joel Kinnaman). Some Twin Peaks fans say that Lynch never should have revealed who killed Laura Palmer, and kept that tension going to sustain interest in the series. House of Cards has done the polar opposite: At this point, it’s strung out its central tensions for so long it hurts.

Along the way, it’s also marginalized some of its better characters into one-trick-pony roles: for instance, Remy was more interesting when he wasn’t just depressed, lovelorn and being blackmailed every second. It seems like Jackie, Remy, and ex-president Walker are really going to bring down Frank with their participation in Hammerschmidt’s article, but ultimately, their contribution seems marginal. Will they ride off into the sunset together, as they seems to be preparing for in the final episode, and possibly, to never return? Let’s hope not.

The fact is: No one wants the war in House of Cards anymore than we want an actual war. Because at this point, no one watches for the political stuff, which is increasingly ham-handedly, and feels irrelevant to our current political landscape. We can imagine Season 5 now — the war abroad mimicking the war at home with Frank and Claire v. Hammerschmidt and their many enemies. It’s not an exciting notion, because it’s the same basic conceit as every House of Cards season. The heat is supposedly being turned up with each instantiation, and yet, we look on with boredom. What else can this show do to shock? At this point, it’s closure we desire.

But House of Cards is a no-brainer and presumably, a cash cow for Netflix. Cheaply produced and extremely popular, there is no reason to pull the curtains. Showrunner Beau Willimon will abdicate his throne next season, leading some to speculate that it will be the show’s last. But it’s perhaps more likely that writers will push the late Downton Abbey model to its furthest extent: keeping the fire burning until every last star has better things to do. There are enough well-known and beloved characters for this show to last past Spacey or Wright, even. Let’s hope it goes out with some dignity, but if Season 4 clarified anything, it is that House of Cards is just as ruthless about sucking the viewer into its unsatisfying, but highly addictive world as Frank and Claire are about seizing power.