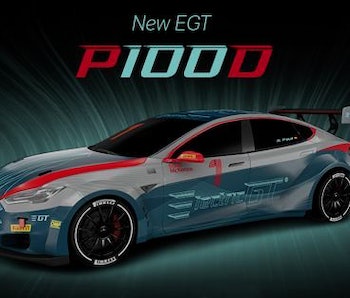 There’s been a lot of talk about how fast the Tesla Model S P100D can go with Ludicrous Mode enabled, fueled by a YouTube video (see below) showing one going 0-60 in 2.389 seconds. But what if I told you, the same car, minus the seats, could do 0-60 in 2.1 seconds?

Yes, the P100D edition of the Tesla Model S is fast, but for this fall’s Electric GT championship, it became even faster after shedding pounds. According to Top Gear, almost all of the interior was removed during recent test, leaving the GT racing version of the car with only the steering wheel, seat, screen, and pedals.

The results were phenomenal. The utilitarian P100D’s time beat every other production car. The speed tests were done ahead of the Electric GT Championship, Grand Touring race in the traditional style, except every car is a zero-emissions Tesla Model S P100D. The field is made up of ten teams that compete in races at seven European courses and three in the Americas.

While the P100D only tops out at 155 mph, it has 778 brake horsepower and 734 pound-foot torque. In the production model, the new Ludicrous Plus software update is capable of reaching staggering accelerating times of 0-60 mph in just 2.389 seconds. Here’s what that looks like:

The high-performance electric car sector is heating up. In November, NextEV took the wraps off its NIO EP9, capable of reaching a top speed of 196 mph.

The Electric GT championship in which the P100D is racing will see two races, one morning and one evening, at the likes of Germany’s famous Nürburgring race track and the Zandvoort track in the Netherlands.

Each track will be limited to 37 miles, and the races will be streamed on YouTube. It’ll be one of the first major demonstrations of the P100D’s prowess to a wide audience, and should set the stage for the number of electric car championships still to come. Game on.