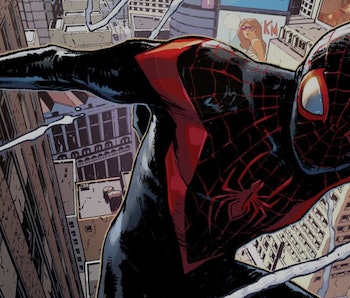 Miles Morales was the former Spider-Man of Marvel’s Ultimate universe, taking over the mantle from Peter Parker. Since the destruction of the Ultimate universe in Marvel’s Secret Wars, Miles has been swinging around the main Marvel comic book universe, teaming-up with both the new Avengers and the Champions alongside Ms. Marvel and Nova.

Miles has enjoyed a huge level of fan support since his introduction, and when Sony rebooted the Spider-Man film franchise with The Amazing Spider-Man, a very vocal fan campaign championed for Donald Glover to play a version of Miles Morales for the film. While the role of Spider-Man ultimately went to Andrew Garfield, fans have never given up on a Miles Morales Spider-Man film. And now that film is real.

The untitled Spider-Man film will be written by Phil Lord and Chris Miller, who previously directed The Lego Movie and are currently working on the Han Solo standalone film for Disney. Meanwhile, the film’s actual directors will be visual effects supervisor Bob Persichetti and Peter Ramsey, who directed Rise of the Guardians.

Coincidentally, Donald Glover, who will appear in Marvel’s upcoming Spider-Man: Homecoming film, voiced Miles Morales in Disney’s Ultimate Spider-Man animated series, and he will be playing young Lando Calrissian in Lord and Miller’s Han Solo film; so he has not been tied to the upcoming animated feature.

More details for the film will likely be revealed over the coming months, but until then, fans will be thrilled to learn that Miles Morales is finally coming to the big screen, albeit not in a live-action capacity. Whether or not this means his character won’t appear in any of the live-action Marvel Cinematic Universe films is yet unconfirmed, but fingers crossed.