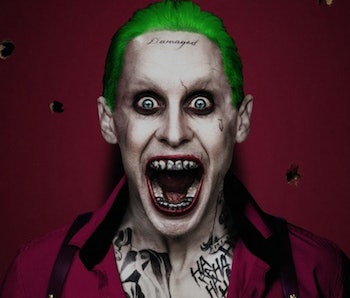 It appears Jared Leto is still hopped up on playing Joker in Suicide Squad, despite the enormously negative backlash the film received in 2016. When critics and DC fans started to tear Suicide Squad a part on social media, Leto’s once obsessive posting slowed, and he bemoaned David Ayer’s choice to minimize his role in the film, telling reporters that the cutting room floor had been littered with lost Joker scenes. The Suicide Squad extended cut didn’t support that theory.

On Wednesday, Leto added two Joker-related images to his Snapchat story, the first one being an image from The Killing Joke, a Batman and Joker story which wasn’t incorporated in Suicide Squad. The second image in his Snapstory, a gilded tooth in a Joker-esque, purple (possibly fake) Gucci box, brings to mind the fact that Batman (Ben Affleck) supposedly knocked Joker’s teeth out before the events of Suicide Squad, making his infamous “grills”, or rather, metal caps, necessary. Fans tend to attribute the fact that they look so shitty to the procedure happening in Arkham, or perhaps Belle Reve.

It isn’t likely that Leto’s snaps mean anything for the DCU, especially since there’s little to no precedent to his social media posts signifying…anything of worth, but it’s worth noting that Leto is still locked into his role, despite not being in Justice League. His role, however, has not been confirmed either way for Gotham City Sirens.