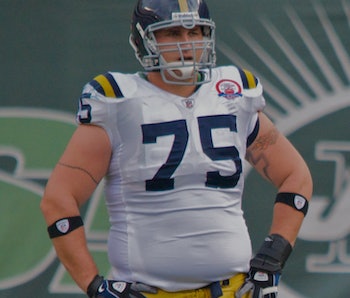 Football is undeniably a sport with athletes. There’s running, throwing, tackling. So why do NFL players trudge around the field with dad bods?

It’s not really NFL players’ fault: Football’s tackles require dad bods. In case you didn’t know, a “dad bod” is a term given to men who don’t fit the buff, meathead stereotype, but also don’t fit the couch potato vernacular. They are in-betweeners through and through. Dad bod qualities usually include love handles, pudgy midsections, and chubby thighs. Which, coincidentally, are all advantages when charging and tackling people. In football, bigger is better, and doesn’t necessarily mean fat — even though the numbers might indicate otherwise.

A 2008 study from the Journal of American College Health evaluated 81 NCAA football players based on their body mass index (BMI), a ratio that determines obesity based on height and weight. Eighty-one percent of football players — in particular, offensive and defensive linemen — surveyed had BMIs that fell in the category of being clinically obese.

But BMI is not a foolproof way to judge a person’s health. As this study showed, the men who classified as obese performed strength and agility tests surpassing “average” men. While science judged them to have dad bods, these guys were agile and strong. The researchers’ point was made clear: BMI alone is not a good indicator of the health status of strength-trained athletes.

Not that these bulky football players were completely in the clear. In fact, practically all the players displayed symptoms of metabolic syndrome, a set of risk factors associated with obesity — like increased risk of heart disease, stroke, and diabetes. In other words, the players aren’t technically fat, but they’re also far from healthy. These problems, according to another study in the Journal of Strength and Conditioning Research, began as early as high school, with high schoolers flagged for cardiovascular disease.

But what about after football? The Journal of American College and Cardiology published a study in 2010 that looked at retired players and how many actually had ended up with the associated risks of obesity. The study was conducted using two groups of men, those who were actual NFL retirees, all defensive and offensive linemen, and those that were in a similar age range and had a comparable BMI to the retirees. They ran a series of tests similar to the previous studies and a sleep examination on each volunteer. After a couple decades off the field, the retirees had a higher rate of active heart disease, sleep apnea, and hypertension compared to other men in their age group who didn’t tackle for a living.

One important thing to note is that the players in all three studies could have a predisposition to obesity and metabolic syndrome and may have decided to play in the first place because of their natural height and size. And BMIs are not a perfect way to figure out obesity: As these studies make clear, you can be clinically considered obese but still have a healthy composition. But one thing is for sure, NFL players need to be monitored for their size. However, the future of football, unfortunately, does not look any leaner.

More like this
Mind and Body
Jan. 30, 2023
Does the Best Workout Exist? Exercise Scientists All Agree on One Thing
By Katie MacBride
Mind and Body
Feb. 5, 2023
How Your Diet Could Help (or Hurt) Your Aging Brain
By The Conversation and Sara N. Burke
Mind and Body
Feb. 1, 2023
Why the future of periods could be none at all
By Elana Spivack
LEARN SOMETHING NEW EVERY DAY.
Related Tags
Share: