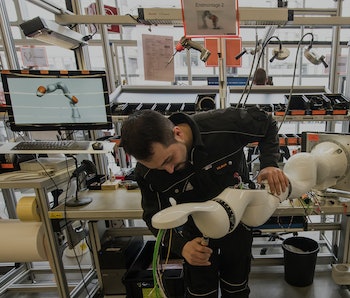 Artificial intelligence can help diagnose cancer, drive cars, and recognize faces, but will A.I. fully replace humans in the workforce? Not if we design it to work with us.

At a World Economic Forum panel on artificial intelligence this week in Davos, Switzerland, leaders in A.I. wondered if using it to augment, rather than replace, humans was a realistic scenario, given the rapid advancement of automation, something President Barack Obama touched on in his farewell address last week with this prediction: “The next wave of economic dislocation won’t come from overseas. It will come from the relentless pace of automation that makes many good, middle-class jobs obsolete.”

Developers are working on cognitive A.I. that can learn, reason, and understand. As A.I. becomes smarter, many, including government officials, worry that A.I. will take away jobs.

IBM CEO Ginni Rometty — member of a five-person panel in Davos offering their views of A.I. — said that technology should augment human intelligence.

“For most of or our businesses and companies, it will not be ‘man or machine,’” Rometty said. “…It’s a very symbiotic relationship. Our purpose is to augment and really be in service of what humans do.”

For example, IBM works with oncologists to use the Watson A.I. to assist with diagnosing and treating cancer. The world’s top oncologists trained Watson, which has a massive database of records. Harnessed with this training and data, Watson can analyze the patient’s health records and identify possible treatment plans.

Likewise, Gutman said with HealthTap, an app that offers video and chat with doctors, A.I. can read the symptoms and refer the patients to the right doctors, who can put those symptoms into context.

Gutman offered the example of a patient complaining about tooth pain that projected to the jaw and the neck. If the patient only Googled the symptoms, the results might have just suggested he had tooth problems. However, a doctor on HealthTap said that it was a heart attack. This was true, and the patient was able to go to the emergency room. This is a case of A.I. working with humans to save a life, Grutman said.

But to develop effective A.I., it must also be inclusive. Ito emphasized the problems from lack of diversity in the tech industry. Right now, it’s primarily a white male workforce in technology. Ito said one of the lab’s researchers, an African-American woman, found that dark faces don’t show up in the core libraries of a face recognition system, which means it won’t recognize those faces. When the developers were testing it, they mostly tested it on white people.

“One of the risks that we have with lack of diversity of engineers is that it’s non-intuitive which questions you should be asking,” Ito said. “…When the people who are actually doing the work actually create the tools, you get much better tools.”

Although automation might take away some jobs, more likely, it will work with humans, and the need to develop A.I. will create even more jobs. Right now, the panelists said, it’s important to invest in training more people in software engineering and creating pathways to working in tech.