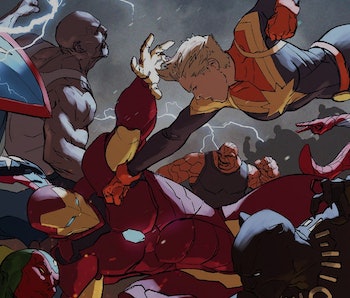 Marvel hopes its fans will get on board with Captain Marvel when she’s played by Brie Larson in 2018. However, after a rough and unlikable 2016, Carol Danvers (as she’s known on Earth) has a lot to make up for. Though Kelly Sue DeConnick’s fantastic run on Captain Marvel will likely inspire the film’s adaptation, Marvel’s most recent comics about Danvers, as part of Civil War II, have left an unpleasant taste in many fans’ mouths. Mighty Captain Marvel, which drops today, needs to redefine Danvers as a diplomat, as opposed to a warmonger, if she’s going to win back her fans.

The Danvers Marvel sold in 2016 is a militant idealist rather than an intergalactic peacekeeper. While her ego, and her unwillingness to bend, are progressive character traits for a female superhero to possess, they don’t win her any adoring fans among Marvel’s readership, which is the opposite of what the company is hoping for. Many critics have attempted to predict how Marvel will contend with the aftermath of Civil War II’s droning, underwhelming storyline, but no one knows for sure which deaths, and which depressing outcomes, will stick. For one thing, we know Tony Stark is dead (ish), but his personality shines on in Invincible Iron Man through the J.A.R.V.I.S.-like A.I. he gifted Riri Williams. If Iron Man gets to wisecrack another day, albeit virtually, Marvel can turn its ship around on Carol Danvers, but it’ll take time.

Danvers makes her first franchise appearance in the hotly anticipated Marvel vs. Capcom Infinite, which debuts this year. Thanks, in part, to her “binary mode,” director Kevin Feige has stated that he believes her to be the most powerful hero in the MCU, which, while thrilling, is a pretty standard marketing tactic. As Marvel moves into its next phase, focusing on new characters like Doctor Strange, Black Panther, the Wasp, and Captain Marvel, the company will have to convince viewers to stay on board with its expanding universe.

To Marvel’s credit, it already appears to be softening Danvers’s image again — this week’s Mighty Captain Marvel depicted the diplomat draping a United Nations flag over a (green) alien refugee. The image would feel heavy-handed if it wasn’t such a sorely needed one in the wake of Danvers’s near-delusional actions in Civil War II. Desperate for any way to streamline her work as the galaxy’s primary investigator, vigilante, and diplomat, Danvers jumped on a Minority Report-style system of justice before folks like Iron Man had the chance to work all the kinks out. In the lead-up to Brie Larson’s movie, Danvers probably won’t be making big moves like that one again.