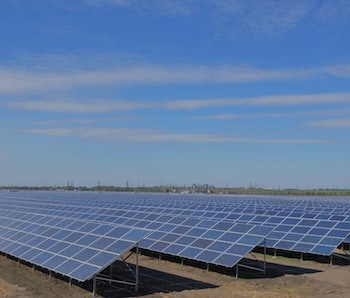 Hearing “Chernobyl” — the 1986 industrial accident that transformed a Ukrainian industrial city into a radioactive ghost town — doesn’t immediately strike someone as a place with an environmentally green future.

But that’s what’s happening in the city of Pripyat, whose largely uninhabitable “exclusion zone” is set to be transformed into a next-generation solar energy hub. Two companies in China have drafted plans for a $1 billion investment in a one-gigawatt solar facility that will cover one thousand square miles of land within the exclusion zone, providing enough energy to power 700,000 homes.

“There will be remarkable social benefits and economical ones as we try to renovate the once-damaged area with green and renewable energy,” Shu Hua, chairman of Golden Concord Holdings, one of China’s biggest renewable energy corporations, said in a press release. While China’s competitor, India, has made remarkable strides in solar energy, China’s upping its investment with researchers creating innovative, advanced solutions like an “artificial sun” and looking to nurture research into fusion power.

Pripyat stands to gain more than an image makeover from becoming a solar energy hub. In the aftermath of the disaster, over 50,000 people had to evacuate their homes, with many becoming displaced. The economy continues to suffer the consequences of the accident, with the government dishing out $250 billion in damages since.

The project is expected to begin this year, supplying hundreds of new jobs to the Ukrainian people — and a potential new way for Chernobyl to be equated with something hopeful, clean, and advanced. Barring any exposure accidents, of course.