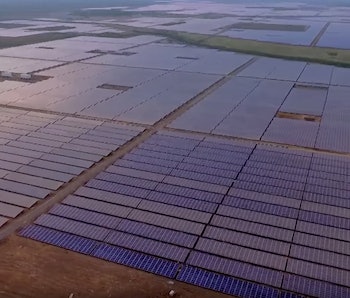 India has supplanted California as home to the world’s largest solar power plant. A facility in Kamuthi, Tamil Nadu in the southern part of the country covers nearly four square miles of land with solar panels that can generate around 648 megawatts of electricity when in full flow. That’s larger in both size and output than the Topaz Solar Farm that previously had the most output with a capacity of 550 megawatts.

Funded by the Indian multinational conglomerate Adani Group, the solar plant is comprised of some 2.5 million individual solar modules, will cost $679 million to build, but only took eight months to build. When at full capacity, the plant is capable of generating enough power for 150,000 homes. India has raised the industrial standard for solar.

Adani Group announced the plant is part of “a phase of revolutionizing the renewable energy ecosystem of India” with solar power plants, solar parks, and manufacturing facilities. An estimated 8,500 people worked on the project; each day they installed enough equipment to produce 11 megawatts of energy. That’s how the plant was built in such a small timeframe.

Building such a large plant is just part of the battle. It also has to be maintained, and Al Jazeera reports that Adani has turned to a solar powered robot to help make sure everything works properly. That robot is tasked with cleaning the solar panels — they can’t produce electricity if they can’t bask in the sun’s rays — on which the plant relies.

Adani will also have to make sure the plant doesn’t cause problems for anyone connected to it. Australia has recently had to grapple with this issue: As more people use solar power, the demand for electricity from the grid becomes less predictable, which can result in blackouts or increased prices.

This plant could sidestep any problems by supplying all of the power its customers need. Adani hasn’t strapped a bunch of solar panels to roofs, which is what is happening in Australia, it’s laid the groundwork for India to reduce its dependence on fossil fuels at the infrastructure level. The company skipped the patchwork of solar and traditional power and went right to a huge solar plant.

The goal: 100 gigawatts in the next five years.

India doesn’t want to stop there — it wants to reach 100 gigawatts in the next five years. That’s an aggressive goal, considering it took more than five years to reach 10 GW capacity, but Bridge to India said it expects the solar market to continue to accelerate its growth thanks to investments from the Indian government and growing interest from energy companies around the world.

Not that India’s alone in its efforts to switch to solar. It’s the fastest-growing source of renewable energy in the United States, according to a recent report from the U.S. Energy Information Administration, and there’s no sign of this trend smoldering out anytime in the near future.

Sweden is also working to shift to renewable power. The country’s finance ministry recently proposed a rule change that would encourage businesses to install solar panels as part of its goal to only use clean energy sources (including wind, nuclear, and hydropower) by 2040.

India’s plans aren’t quite as ambitious. The country announced in 2015 that it wants 40 percent of its electricity to come from renewable — or at least low-carbon — sources by 2030. But it’s worth remembering that India is one of the world’s most populous countries; it’s going to use more electricity than its less densely-populated counterparts.

So even though it’s being conservative as far as the percentage of renewable energy goes, India’s actually on track to become the world’s third-largest solar market in 2017, according to Al Jazeera. Considering how quickly this gigantic solar plant in Kamuthi went up, and how many homes it’s expected to power, that’s no surprise. India’s about to become the solar industry’s crown prince.

More like this
Innovation
7 hours ago
A wild new plane-train hybrid could whoosh you to your destination — if it can get off the ground
By Molly Glick
Innovation
8.5.2022 6:30 PM
This breakthrough stem-cell therapy could reverse genetic blindness
By Charles Q. Choi
Innovation
8.5.2022 11:00 AM
Alexa could diagnose Alzheimer’s and other brain conditions — should it?
By Joanna Thompson
Related Tags
Share: