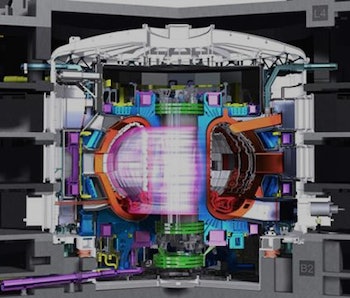 In February, Chinese researchers met a milestone by creating a nuclear reactor plasma that reached a temperature of 50 million Kelvins (50 million degrees Celsius), which was three times the heat produced by the sun’s core. Now, they’re reporting that they’ve managed to actually contain the energy the reactor produces for an entire minute, bringing them closer to a fully functional “artificial sun” and future of sustainable thermonuclear energy.

The experiment was conducted using the Experimental Advanced Superconducting Tokamak, an experimental thermonuclear reactor at the Institute of Plasma Physics at the Chinese Academy of Sciences. The reactor, which was completed in 2006, replicates the energy of the sun through creating a plasma, a hot ionized gas where atoms fuse together to create large amounts of energy. This is different from nuclear energy created by fission, which a reaction causes atoms to divide rather than merge.

In September, China General Nuclear Power Group (CGN) won a bid to take over 9 percent of ITER’s nuclear power research. Details of the agreement, including a budget and a supplement agreement for the design of a steam-condensing tank, were finalized in November.

ITER, which comprises China, the European Union, India, Japan, Korea, Russia, and the United States as members, was launched as an international joint experiment in fusion in 1985. According to its website, the coalition aims to “prove the feasibility of fusion as a large-scale and carbon-free source of energy based on the same principle that powers the sun.” Ultimately, ITER wants to create a reactor that can produce 500 megawatts of fusion output for 400 seconds. While Chinese researchers did not reveal the exact length of the most recent test, they say it was longer than 102 seconds, the record set in February.

The United States initially committed to building roughly 9 percent of the ITER project and, as of 2016, has spent $3.9 billion on it on research for tests that won’t occur until 2020 at the earliest. In 2015, researchers at MIT announced a design for a new nuclear fusion reactor that is able to produce a magnetic field strong enough to contain large amounts of plasma in a relatively tiny fusion reactor.

Private companies have also become major players in the fusion energy game. California-based companies General Fusion and Tri Alpha Energy have attracted nearly half a billion each in venture funding. With China’s latest advancement, however, ITER could still be on track to reach its 2035 deadline.