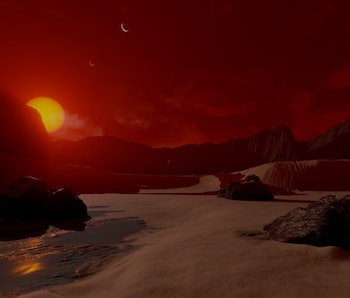 NASA dropped a bombshell on Wednesday afternoon with the announcement that they’ve discovered a total of seven potentially habitable planets orbiting Trappist-1, a dwarf star that’s just 40 light-years away from Earth. However, there’s still a huge difference between “potentially habitable” and “habitable,” and finding actual evidence of life is an even bigger leap. Still, the Trappist-1 planets are promising, though the director of Cornell University’s Carl Sagan Institute says any life on these planets might look very different than anything we’re used to, because of wild levels of UV radiation.

“Trappist-1 now holds the record for the most rocky planets in the habitable zone — our solar system only has two — Earth and Mars,” Lisa Kaltenegger said in a statement. “Life is a definite possibility on these worlds, but it might look different because there’s likely to be very high ultraviolet radiation flux on the surface of these planets.”

Kaltenegger, who authored an under-review paper on this very subject (“UV Surface Habitability of the TRAPPIST-1 System”) explains that an active star represents a potential threat to life.

“We find that if the star is active, as indicated by the X-ray flux, then planets need an ozone layer to shield their surface from the harsh UV that would sterilize the surface,” Kaltenegger said. “If the planets around Trappist-1 do not have an ozone layer (like a young Earth), life would need to shelter underground or in an ocean to survive and/or develop strategies to shield itself from the UV, such as biofluorescence.”

Biofluorescence — not to be confused with bioluminescence, the cool lights that deep-sea creatures generate — occurs when a creature absorbs light and reemits it at a much lower energy level.

If that’s the case, Kaltenegger thinks that we might be able to find any such life by using its natural biofluorescent defenses. She’s also authored a paper titled “Biofluorescent Worlds: Biological fluorescence as a temporal biosignature for flare star worlds.”