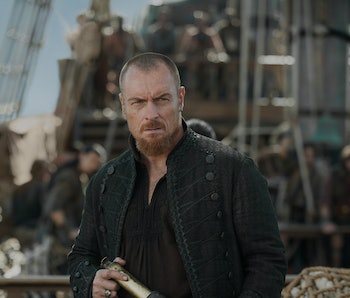 Captain James Flint on Black Sails, played by Toby Stephens, has been a tumultuous centerpiece for the show. He began Season 1 as a larger-than-life figure whose motives were inscrutable to both the audience and his fellow characters. As the pirate drama has progressed, its high-seas action has been accompanied by the unspooling of his psyche. With that spool on its final thread in the show’s last season, Stephens got on the phone with Inverse to take us inside Flint’s mind and preview what lies ahead as his story closes.

“He’s a bit demented,” Stephens tells Inverse. “Flint is playing out his own psychodrama on this epic level. He’s not leading this revolution for altruistic reasons; it’s for his own personal reasons. That is why, in the end, somebody has to stop him. But what’s so brilliant about the writing is that it’s also totally logical and pragmatic at the same time. You can justify it. He justifies it all the time.”

Season 2 is, in many ways, the true beginning of Flint’s journey. It justifies his actions to the audience in the form of his backstory. He began as an officer in the British Royal Navy who worked to end piracy until his affair with the idealistic Thomas Hamilton came to light and civilized society destroyed both men’s lives. As a result, Flint became a pirate and acclimated a little too well to playing the part of society’s “monster.”

But surprisingly, the aspect of Flint’s evolution that Stephens enjoys most is Season 3.

“I remember [creator] Jon Steinberg discussing [Season 3] with me,” he says. “It’s kind of got bits of The Odyssey in it; it’s got Moby Dick. The dreams were such an imaginative way of psychoanalyzing his character. It was such a beautifully structured journey for him. I’m not saying that Season 4 isn’t that, but it’s different because the journey in that one is really about Silver until the last section where it becomes Flint again.”

Over the course of Black Sails, Luke Arnold’s John Silver has progressed from a thorn in Flint’s side to his reluctant sidekick in Season 2 to his confidante in Season 3. By the show’s fourth and final season, “friends” seems like an inadequate word. They share an emotional shorthand and understand each other in a way nobody else does. To its credit, just as it did with Flint’s relationship with Miranda Hamilton (Louise Barnes) Black Sails doesn’t try to define it neatly.

“There’s a need in Flint for Silver as a sort of alter-ego,” says Stephens. “As an expression or an extension of himself. That was interesting for me to play, especially this season where there’s a shift in power. There’s a sense that Flint’s star is declining, and Silver’s is ascending, and how that isn’t going to end well. Yet in a way, Flint makes it happen. He sort of gives away his power to Silver. Why does he do that? It’s interesting.”

For his part, Stephens thinks it comes down to sharing the burden of his position. “He finds a kindred spirit in Silver. It’s finding this balance between somebody who’s driven by pragmatism but also has this dark side — this anger that’s feeding it, these motivations that are emotional. Flint projects this on him. Because I don’t think Silver can ever live up to that. I don’t think anybody can live up to these things that Flint demands of them. It’s how that resolves itself which is where Season 4 really kind of comes into its own.”

Stephens maintains, however, that this way Flint projects onto Silver is subconscious. “I don’t think he is aware of it — or if he is, it’s something that he kind of pushes into the background. I think he needs Silver. But how much does Silver need Flint? That’s the question.”

As Season 4 unfolds, the audience has a notion of how Flint’s story will end — after all, Black Sails is a Treasure Island prequel. Flint is dead by then, a fearsome ghost woven into the backdrop of the tale. But as creator Jonathan Steinberg told Inverse, “What we ended up deciding was to treat Treasure Island as a story that was written based on historical events that take place on the show.” Theoretically, that leaves room for divergence.

Stephens himself didn’t know what Flint’s ultimate ending would be until two weeks before he got the final script. “I think Jon and Robert found such a brilliant ending for Flint,” he says. “I had a vague idea of where the season was going, but I didn’t know until about two weeks before. In a way, it was much more realistic not knowing. I remember doing a play once which was a tragedy, and the director gave this note to the actors saying, “You don’t know that this ends badly. Your character isn’t seeing it as a tragedy. You just think this is another day.”

About whether he took any props from the set after the show wrapped, Stephens says, “I deliberately didn’t. I didn’t want anything. He sort of resides in my head. I don’t need any physical [keepsakes]. I really liked him; I really identified with him and admired him as well as being appalled by him. I really understood him. Having to say goodbye to that is quite difficult — but it’s such a satisfying end to it.”

The fourth and final season of Black Sails is currently airing on Starz.