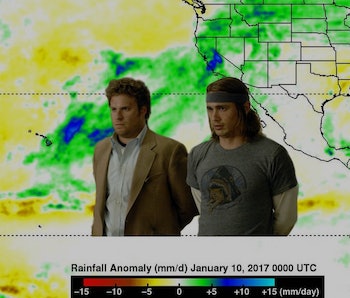 Pineapple Express isn’t just a fun 2008 stoner comedy starring Seth Rogen and James Franco, it’s also the reason why California is finally getting some relief after a long, nasty drought.

NASA explains that the Pineapple Express is what’s known as an atmospheric river, a slow-moving low-pressure center that brings tropical moisture from the Hawaiian Islands to the West Coast. A subtropical jet steam carries the moisture over the Pacific, and it turns to rain once it hits the coastal mountains. Recently, it’s been bringing much-needed water to California.

The first storm arrived in the middle of the week of January 2, according to NASA, and it was followed by another storm over the weekend of January 7. Although the drought-plagued state appreciated the heavy rainfall, NASA notes that it did cause flooding, hurricane-force winds, and some nasty mudslides. The agency expects several feet of snow in the interior of the state.

Both the TRMM and GPM are joint ventures between NASA and the Japanese space agency, JAXA. Columbia Pictures, the studio behind the movie Pineapple Express, is not involved.