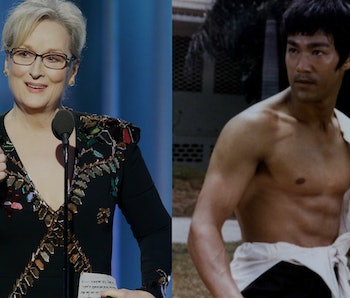 While accepting the Cecil B. DeMille award at the 74th Golden Globes last night, the renowned Meryl Streep gave an impassioned speech championing diversity, free speech, and tolerance in the face of the looming Trump regime. Rightfully criticizing the reality star for his dangerous short-temper and overall repulsive nature, Streep’s speech was moving in an otherwise cringeworthy show where host Jimmy Fallon fell unbearably flat.

But, in one particular moment, Streep made a throwaway barb towards entertainment preferred by hiveminded Trump voters: Without diverse voices, “you’ll have nothing to watch but football and mixed martial arts, which are not the arts.” The point Streep was making — which earned thunderous applause from those in the theater — is that the arts are critical for culture. Without them civilization would not evolve past ancient Rome’s bread and circuses. The Florence Foster Jenkins star isn’t wrong, and her incendiary words only remind how sharp the performer has always been.

Throughout the rousing six-minute speech, the dig at MMA (mixed martial arts) is an off-the-cuff line in a barrage of inspiring sentiments. But Streep’s words ignore the historical legacy of Asian actors in Hollywood, and her “not the arts” remark is contradictory to her message of inclusiveness. Because of its roots in Asian culture and presence around the world, martial arts are art, but more importantly, without martial arts, an entire generation of Asian actors and an entire subgenre of action movies would disappear from Hollywood history.

Credited as the grandfather of MMA, Bruce Lee came into show business when TV producer William Dozier saw Lee at a 1964 exhibition. After starring in shows like The Green Hornet, Lee grew disillusioned over Hollywood’s limited roles for Asian actors — typically servants, sidekicks, and sexless clowns — and went to Hong Kong, where he landed his breakout role in 1971’s The Big Boss. After a few more hits in Asia, Warner Brothers saw a lucrative market to tap and came running back to Lee for the first Hollywood-produced martial arts film Enter the Dragon. Lee died before Dragon hit theaters, but his defining image as a masculine Asian hero — unheard of before Lee — became an image of empowerment for generations of Asian and diverse audiences.

While Lee wasn’t able to reap the rewards of his breakthrough, he kicked the door open for others like him: Jet Li, Jackie Chan, Lee Byung-hun, and Donnie Yen have followed, reaching heights impossible without Lee’s success. Yen, himself an MMA practitioner who utilized techniques in influential action films like Flash Point, is approaching cosmic stardom after his show-stealing role in Rogue One: A Star Wars Story, the second highest-grossing film of 2016. It’s a sign of how much Hollywood is changing that Yen stole hearts in Rogue One not just for his martial arts, but also for his portrayal of a deeply loving platonic male friendship. In fact a new generation of Asian and Asian-American performers is on the rise — including Dev Patel, Rahul Kohli (iZombie), Rinko Kikuchi, and Vincent Rodriguez (Crazy Ex-Girlfriend) — that doesn’t need to rely on martial arts, and like Yen can flout their sensitive sides without being considered effeminate. But none of those actors would be around without the visibility of Lee’s titanic image. Not all actors can hone their craft with Shakespeare like Streep, and for many Asian actors, martial arts was their voice of self-expression and the only way to break into Hollywood’s creative class.

In her speech, Streep didn’t aim at Lee, and the historic change to cinema he represented, but at competitive MMA, the multi-million dollar sport dominated by the UFC led by CEO (and Trump supporter) Dana White. But Streep’s vague phrasing — that all mixed martial arts are “not the arts” — diminishes Lee’s influence and significance. Kung-fu masters have become another stereotype, but Lee was like oxygen for Asian audiences haunted in a time Mickey Rooney’s Mr. Yunioshi from Breakfast at Tiffany’s.

In all likelihood Streep is not a Bruce Lee fan, so it was easy for her to mistake MMA, the sport with a low-brow demographic, with the foundational art innovated by Lee. But as Streep tried to communicate inclusivity and tolerance, she short-sightedly painted all mixed martial arts — a physical expression for many people of color, even today — as not “art.”

For decades Bruce Lee and his successors empowered marginalized people through influential images, which is the very magic of cinema that the Hollywood Foreign Press celebrated by heaping awards on La La Land and Streep. For all her wit and intelligence in roasting Trump and his voter base, Streep accidentally, but grossly overlooked the significance of her words. No one can deny the threat of the incoming administration that traffics in blatant racism, misogyny, and the ignorance of facts. But Streep still gravely undervalued the work of so many who still remain invisible under Hollywood’s glitz.