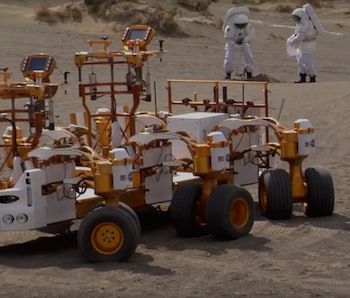 If robots are destined to become our overlords, we might as well work to get a little perspective on that future — literally. NASA Ames Research Center’s Intelligent Robotics Group is creating robots with 3D user interfaces that let you (or at least, the lucky human operating them) see the world through their eyes. The Visual Environment for Remote Virtual Exploration (VERVE) has already been adapted to Nissan’s autonomous vehicle systems to give the operator the means to see Mars through their eyes. The Silicon Valley-based center released a new video detailing the technology and its applications.

Astronauts aboard the International Space Station have already been able to use the VERVE system to control the robots on the ground at Ames. Fluid communication between deep-space astronauts and the autonomous rovers they command will be a cornerstone of our missions to explore and eventually colonize Mars.

Much as the VERVE technology will allow autonomous rovers on the Red Planet to intelligently navigate its rocky surface, it’s facilitating Nissan vehicles’ ability to make the safest decisions about surrounding traffic in real time.

“This is not only a demonstration of the transfer of space technology to industry, but also the application of their research back to our space technology, with additional uses for our unmanned aircraft systems research. This is a perfect example of technology literally driving exploration and enabling future space missions,” said Ames Center Director Eugene Tu at the 2017 International CES.

The Intelligent Robotics Group specializes in developing technology to explore remote and extreme terrain — like Mars — and, in the case of VERVE, providing 3D views of that terrain.

We tend to associate NASA’s Mars-focused robotics efforts with the Curiosity rover, but there’s a fairly deep bench of fascinating missions — these diminutive bouncing robots for instance, or this recent effort to partner with private companies testing their robots on the moon as a means of proving their worthiness to progress to Mars.