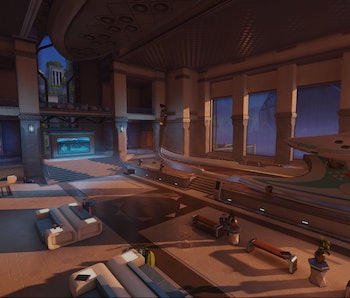 Originally shown off during BlizzCon 2016, Oasis is the second new map to join the rotation in Overwatch so far. Just like the first new map added to the game back in August, Eichenwalde, Oasis adds a little variety by combining wide, open areas with what feels like dozens of closely entangled flanking routes. While it doesn’t excel at one specific element like the narrow focus of Eichenwalde, Oasis is one of the most entertaining maps thanks to the dynamic blend of areas and ability to play with vertical movement.

The in-universe location itself was founded by a group of scientists who were looking for a way to push the boundaries of what modern technology could do, making Oasis one of the world’s most advanced cities in the Overwatch universe. As such, Oasis is filled with beautiful vistas and a highly technological landscape covered in screens, lights, and foundations. Even though you probably will be more concerned with the combat in front of you, it’s actually worth taking a look around.

As a Control map, Oasis has three distinct areas you’ll be playing on in Quick and Competitive Play: City Center, Gardens, and University. Each of these three zones feels extremely different from a design perspective. Take City Center, for example, which is a tightly packed map with a few floors that all pour into the central Control objective. The objective itself is relatively open with little cover, allowing heroes like Pharah, Zarya, and D.Va to shine thanks to unobstructed lines of fire. At the same time, it’s also surrounded by small passageways with plenty of cover that heroes like Genji, Reaper, and Symmetra can use to surround the objective and clear it with ease if their opponents aren’t paying attention.

Gardens and University feel more open compared to City Center, which is a nice compliment to the tight close-quarters engagements you’ll find there. Both of these areas have a relatively open Control objective once again, but instead of corridors, they feature many ledges and hiding spots that players can use to get vertical. Heroes like Pharah, Genji, Hanzo, and D.Va shine here not because of the damage they can put out, but because of the opportunities they have access to courtesy of their ability to climb vertically. Pharah players can rain down hell on their opponents in University and Gardens, while Genji players will simply be able to outrun their opponents and strike when they least expect it with a Dragonblade ultimate.

Regardless of the area you end up enjoying the most, Oasis is a map which offers plenty of options when it comes to pushing, capturing, and holding the objective. Instead of following one optimal path to the point, you’re able to flank around and approach it from at least half a dozen angles, giving your team an opportunity to turn the tide regardless of how far behind you are.

That said, I’ve had a few specific matches on Oasis where my team has been completely walled off from the objective with no meaningful way to retaliate. If the opposing team manages to push you off the objective and then set up a few notable defenses with heroes like Symmetra and Torbjörn, you’ll have a tough time pushing them back far enough without a Pharah or D.Va. Even then, there’s bound to be a few matches where you simply won’t have a way in. Thankfully, it never felt like an error in the map’s design to me, just the usual case of matchmaking placing me against an infinitely better team of players.

Compared to Eichenwalde, Oasis is a much more traditional experience that feels akin to maps like King’s Row, Volskaya Industries, and Hanamura — the main difference is that it’s a Control objective instead of an Assault, Escort, or Hybrid one. It may not have as much of an impact from a gameplay perspective as Eichenwalde, but it’s quickly become one of my favorite Control objective maps. Instead of forcing players into tightly packed objectives, Oasis’s new open approach to map design is one worth getting behind for future additions.