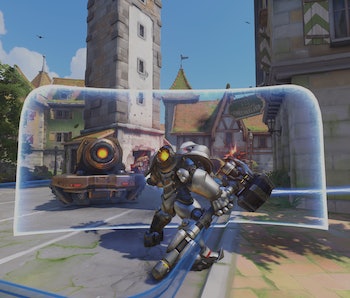 When the first new map for Overwatch was announced at Gamescom, it was both exciting and terrifying. How would it stack up against the current maps players have been learning for the past few months? After playing a few rounds via the game’s public test realm, it’s safe to say that the new German map feels like a worthy addition to Overwatch’s lineup — all thanks to its narrow corridors and tight hallways.

Eichenwalde, as the map is called, is set in a village next to a gigantic German castle, but it’s one of the smallest maps in the game I’ve seen so far. Most of it is filled with passageways that loop around either side of the main path players follow with the payload, which gives characters like Genji and Reaper easy flanking opportunities. These closed areas are complimented with larger, open areas on key points of the map that allow snipers to deal massive amounts of damage provided they’re given the chance.

Regardless of where you are on the map though, there are tons of ledges that can instantly lead to your death if you aren’t careful. You can also use these ledges to your advantage however — especially if you’re a Lucio, Junkrat, or Pharah player. It’s also a great map to Reinhardt charge enemies off of as well.

When you take Eichenwalde and compare it to Overwatch’s many other maps, it seems to be a much more focused pathway designed for quick push-and-pull matches. Almost every match I played felt one-sided, with the attacking team pushing through effortlessly or the defending team holding the line far too easily.

That said, Eichenwalde does comes across as a little tilted towards the defending team provided they know what they’re doing. Each of the key areas is an isolated series of buildings that defenders can split up and lock down before collapsing on the main objective when the attacking team makes a big push. Spawns also seem to favor defenders now as well, who don’t seem to have as long of a walk as the attacking team on late-game defense points.

This can be even further negated by a player using Symmetra or Lucio too, who can turn that brisk walk into a few-second return in order to keep barreling down on the attacking team.

From a competitive standpoint, the final point on Eichenwalde is a huge concern. Located inside the castle itself, it gives the attacking team two small points of entry and a few ledges centered around a narrow hallway which the defending team can easily lock down with coordination. In every game I played, the victory was decided on the last point — where defense almost always took the win.

Just like the final point in King’s Row, though, there’s certainly something to be said about coordinated ultimate abilities here. If stacked properly, a Reinhardt and Hanzo/Reaper ult combo can easily clear the defenders out of the room. That doesn’t make it any less difficult to push through as the attacking team however.

Even with the shortcomings of the final point, Eichenwalde is an absolute blast to play. There’s so many well-placed corridors and passageways that allow players to flank around from, plus a decent number of perches for a Bastion or Windowmaker to take advantage of. As more players get a chance to check out the map, more strategies will surface too, which could compensate for the difficulty the attacking team seems to currently have in PTR.